I’ll bet all the ad money I’ve earned during Phase One and Phase Two that 95% of the Academy members who love The Artist (or at least are giving it their Best Picture vote) have never heard of OSS 117: Cairo, Nest of Spies (’06) or OSS 117: Lost in Rio (’09), much less seen them. 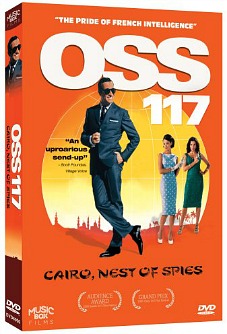 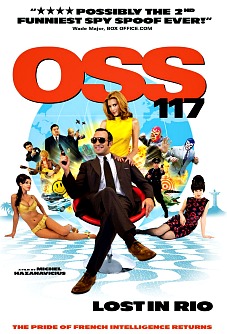 They should at least be aware of them and what they are. Because these two clever comedies — 007 spoofs released in ’06 and ’09, directed by Michael Hazanavicius, starring Jean Dujardin and costarring (in the Cairo film) Berenice Bejo — are cut from the same cloth as The Artist. In fact they’re the same basic shtick.

All three are driven by a reflective tribute-to-the-past mentality, and are extremely scrupulous in replicating the particulars. The difference with The Artist, of course, is that it invests in pathos and tragedy in act three instead of deadpan comedy start to finish. But the depth factor is pretty much the same. All three are about cinema style and recombining elements and turning old-time genres and forms into refreshments.

If Academy chiefs were to insist that AMPAS members attend special screenings of OSS 117: Cairo, Nest of Spies and OSS 117: Lost in Rio this week, many planning to vote for The Artist would change their minds for two reasons. One, they’d realize that Hazanavicus, Dujardin and Bejo have been working this routine for five or six years and that The Artist isn’t quite as inspired as they’d thought. And two, many would realize that the spy spoofs are just as exacting and dead-on in recreating early 007 films as The Artist is in reviving the silent black-and-white era of the 1920s, and that the OSS films are funnier and more pleasing.

That’s how I feel, at least. The OSS films are a kick. And purchasable through Amazon. 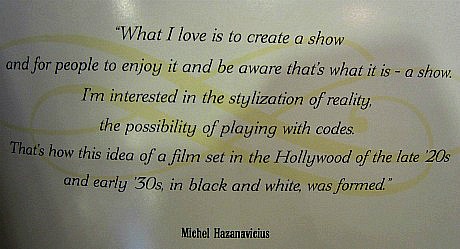