The Biblical word “Babel” refers to “Babylon,” which generally means a place in which the serenity of God’s path is not heeded. In Genesis 11:9, Babel “is etymologized by an association with the Hebrew verb balal, which means ‘to confuse or confound.'” This should give you an oblique idea about where Alejandro Gonzalez Innaritu ‘s Babel (Paramount Classics, 11.17) is coming from. I’ve read Guillermo Arriaga‘s script because the film is most likely going to play at the Cannes Film Festival, and I want to be up to speed. Like Innaritu and Arriaga’s Amores perros and 21 Grams, Babel about how a single violent event — a car accident in the first two films, and a shot fired from a rifle (“a well-conserved .270 calibre Winchester 60”) in the new film — affects the fate of numerous unconnected people in various rippling and/or tangential ways. I won’t discuss the story particulars, but the stars, as mentioned earlier, are Brad Pitt, Cate Blanchett, and Gael Garcia Bernal…although there are vivid, fairly sizable parts that will be played by another four or five actors, at least. It’s set in Tunisia, northern Mexico and Tokyo, and I’ve tried to learn the name of a young Japanese actress who plays a character named “Chieko.” (Does anyone know? I’m interested because there’s a nude scene factor.) I’m not going to get into the script very much either, but it’s one of those pieces in which God is in the details. There’s not a shitload of plot — it’s more sparely written than the other two films — but what happens cetainly sticks to your ribs. I would call Arriaga’s script lean, pungent and haunting. Although the emotional rapids don’t churn quite as heavily or tempestuously as they did in Amores perros and 21 Grams, what settles down at the end is some kind of less-is-more residue. Babel‘s three stories, which unfold at roughly the same time but within slightly staggered time frames (in terms of the back-and-forth of what we see and when), are about confusion and wrong turns and things going badly in the world today…about the unfairness and randomness of life and the off-and-on sensuality of it. Is it about rot? The end of the world? An inter-connected world society collapsing and eating away at itself? Depends on your reading of the script or the film, but one thing’s for sure: two (presumably) pretty actresses have nude scenes. I know, I know…I’m a profoundly deep cat. 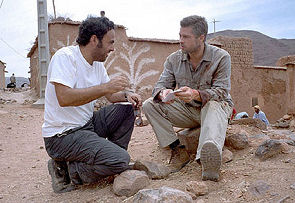 April 13, 2006by Jeffrey Wells2 Comments
« Previous post
Does Columbia Pictures' decision to
Next post »
It was officially announced yesterday…"officially"