For a brief period in the early ’80s I was seriously flirting with an idea of launching a glossy culture magazine called Nothing. Of course, a series of snide, lighthearted riffs on what was then an emerging new current — a notion that glib irony and an increasing absence of sincerity or “meaning” in the arts had virused into a kind of existential fast-food that everyone was consuming — was doomed to fail. It was too uptown, too dry. 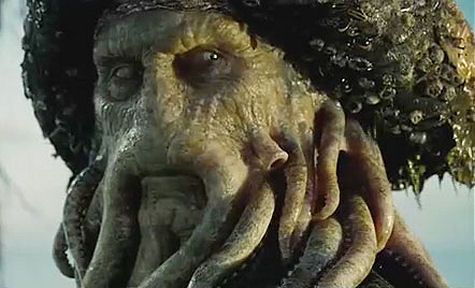 Bill Nighy as Davy Jones — the greatest movie villain to come along in years, and a landmark CG accompishment

But if Nothing had succeeded and was still publishing today (and I were still the editor), Pirates of the Caribbean: Dead Man’s Chest — a profile of director Gore Verbinksi, probably — would be on the cover of the current issue.
Every scene, every shot, every frame of this 149-minute action blast and production-design extravaganza is a technical knockout. If your idea of great entertainment is measured primarily in terms of EED — extraordinary eyeball diversion — Pirates 2 is going to wow you. It’s going to fill you with good-time- movie delight.
I was over the moon about one particular element — Bill Nighy’s Davy Jones character, not only a villain extraordinaire but a masterful CG creation. Nothing I say in the rest of this review will slight this accomplishment in any way, shape or form.
But you need the right kind of hollowed-out attitude about movies to have a truly good time with Pirates 2. If you’re don’t, you may have some problems.
There is nothing, nothing, nothing going on inside this film. I can hear the Sons of Matthew McConaughey going “awww, screw him” right now. Only guys who are out of the post-Millenial loop would complain about a good-time jokey-ass pirate movie, they’re probably thinking. Lighten up and grow a sense of humor, dude. Life sucks if you can’t kick back and have fun.
But I get the humor. Pirates is very funny at times. It’s inventive and spunky every step of the way, and there’s the comfort of Johnny Depp’s jaded-smartass performance as Cpt. Jack Sparrow, and the pleasure of seeing Orlando Bloom and Keira Knightley hold their own and then some, and studying all those wonderfully choregraphed action sequences. 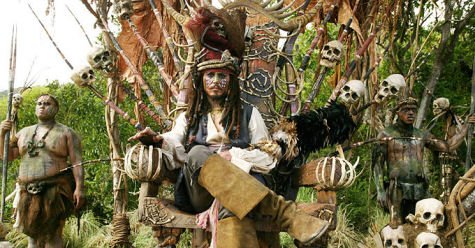 This is a superbly calibrated and perfectly-timed movie, and Darius Wolski’s photography is drop-dead luscious. There’s a shot of rain falling on a set of teacups in the very beginning that really made me smile.
But it’s almost creepy how everything that’s good about this film is entirely about the eyes. Nothing kicks in within. Not ever, not once.
Jerry Bruckheimer used to make sirloin-steak guy movies. This is a Vegas movie for the whole overweight popcorn-munching family, and it feels like a real shame. I never realized in the mid-to-late ’90s that The Rock, Con Air and Gone in 60 Seconds were manifestations of Bruckheimer’s golden era, but they sure seem that way now compared to Pirates.
I need to reiterate how absolutely delighted and mesmerized I was by Nighy’s Davy Jones, the slimiest, yuckiest squid-faced villain to ever rule over a motion picture. The whole world is going to feel this way — this is a world-class baddie for the ages — although it’s only Nighy’s voice and body (i.e., not his head) at work here. His petroleum jelly maggot-squid head and light-blue eyes are all CGI. 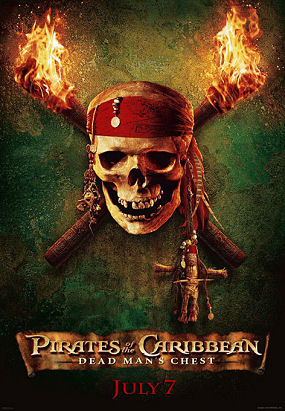 Nighy is the captain of the Flying Dutchman, a three-masted ship that dives like a submarine and mostly prowls around underwater, which accounts for the barnacles and slime covering everything and everyone on board. (So why is it called the Flying Dutchman?) Nighy deliver his lines with perfectly honed humor and wit. He should be nominated for a Best Supporting Actor Oscar…really.
The basic plot is twofold. Davy Jones believes that Sparrow owes him his soul, and he’s slimy and ferocious enough to insist upon this so Sparrow has to figure an escape. (Finding a key and a small wooden chest containing an organically throbbing object figure into this.) And the romantically entwined Will Turner (Bloom) and Elizabeth Swann (Knightley) have to deliver Sparrow’s compass to a frigid, bewigged British magistrate who will hang them if they don’t.
And for whatever reason, Verbinksi has decided to take two and half hours to tell one half of the story. (Pirates of the Caribbean 3 will be out in May ’07, and if it’s as long as this installment that two films will one day be a five-hour DVD.) The reason it’s so long is that Verbinksi is a Big Cheese these days and, like Peter Jackson, can do what he wants to do. And what he wants for this film is to digress and joke around and sometime slow things down for exposition’s sake.
The giant-squiddy Cracken monster, one of the joke-around elements, is just okay. Very fine CG, I mean…big tentacles!…but again, it’s strictly an EED thing. If that’s all you want from a film, fine. 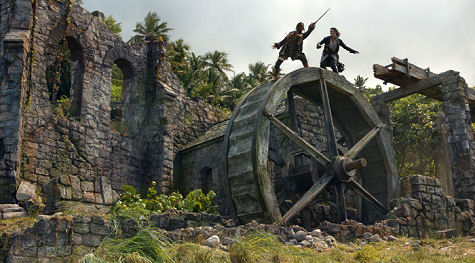 Pirates 2 didn’t have to be this long, of course. Attitude romps should never run more than two hours. Verbinski and Bruckheimer know this — it’s a law — and they went ahead anyway.
I became very depressed last night when I looked at my watch, hoping to see I had about 30 or 40 minutes to go, and I realized there was a whole hour more. An hour! I had to go out to the lobby and walk around a couple of minutes to prepare for the coming ordeal.
The script should have been tighter, there didn’t have to be so many tangents and curlicues, and I swear to God I couldn’t understand any more than five or ten words spoken by a voodoo priestess character with black lips and inky-purple teeth (played by Naomie Harris). But I liked Stellan Skarsgaard as Bloom’s barnacled ghost-dad. He’s the only one trying to do anything semi-soulful in the whole film.
Pirates of the Caribbean: Dead Man’s Chest is the best-made serving of big-studio eye candy in a long time. The craft that went into it is truly top of the line. It looks great and buckles swash like a champ. But if you see this thing and use the word “joy” to describe the way it made you feel deep down, there is really and truly something wrong with you. 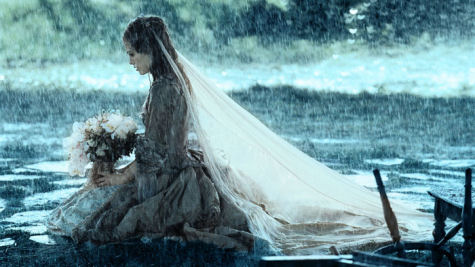