The Buckingham’s “Don’t You Care?” 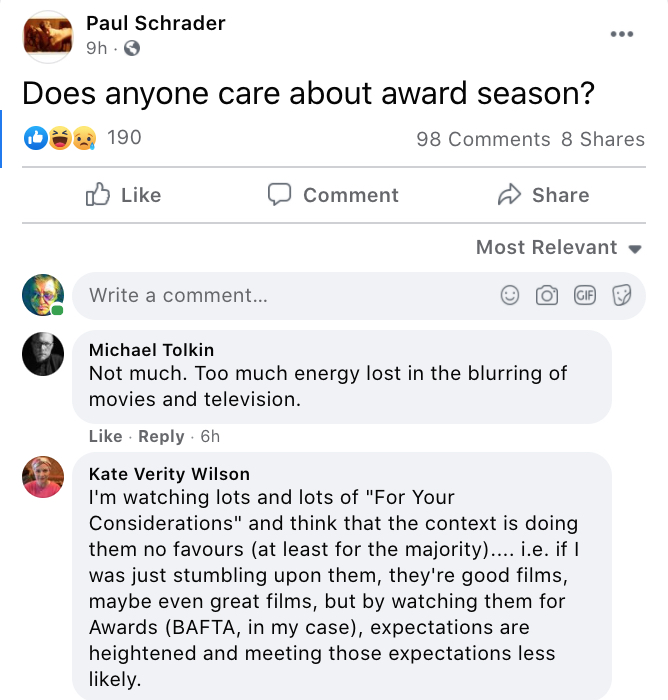 Easy Answer for Paul Schrader: It’s hard to gauge how much the Academy membership cares right now about the streaming pandemic Oscars, especially with the big telecast over three months away. What’s certain is that everyone is too afraid to vote with their gut about anything. There’s only one way to vote and that’s defensively. Here’s how Sasha Stone and HE have explained it in previous posts:

Stone explanation #1: “Bloggers scan each project for un-wokeness. Films by and about white males are mostly fair game for any kind of attack, and hopefully will eventually be just completely shunned. One tweet is all it takes to send a wave of hysteria through the hive mind and suddenly that film, too, is problematic. And anyone who likes the film or votes for the film is likewise caught up in that shitstorm.”

HE Explanation: “Twitter is the judge and jury but no one wants to be seen as complicit in anything outside the approved wokester safety zone, and so they vote accordingly.”

Stone explanation #2: “Bloggers and critics are therefore modulating for this potential blowback with [careful] choices. We’re all predicting the Oscar using the same method. In an ordinary year we might pick a movie [that] Oscar voters would likely go for, given what we know of the Academy’s taste. This year, we compensate for the ‘woke scare’ and we say ‘this is the movie they might go for if they are wanting to send a message that they are not racists or sexists or transphobes.’ In short, people will likely be voting from a place of defending themselves from potential attacks.”