The Great Douglas Trumbull, 79, Has Departed

All hail director, special-effects wizard and high-frame-rate advocate Douglas Trumbull, who has passed at age 79. His SFX bona fides include 2001: A Space Odyssey, Close Encounters of the Third Kind, Star Trek: The Motion Picture, Blade Runner and The Tree of Life; he directed Silent Running and Brainstorm. I remember the 60 fps Showscan process….first saw it in ’83!

“Visit to Trumbull Village,”‘ posted on 8.10.18: “Restoration guru Robert Harris and I spent most of today (Friday, 8.10) visiting the legendary Douglas Trumbull — special-effects designer and innovator (Close Encounters, Blade Runner, Tree of Life), director of Brainstorm and Silent Running, the Thomas A. Edison of knockout movie concepts and visuals — on his sprawling estate in Southfield, Mass.

“The highlight was experiencing (watching sounds too bland) Trumbull’s Magi, a mindblowing digital 3D projection system that delivers images at 120 frames per second and hefty woofer shake under your seat, and which turns you around in a way that feels pretty damn unique. 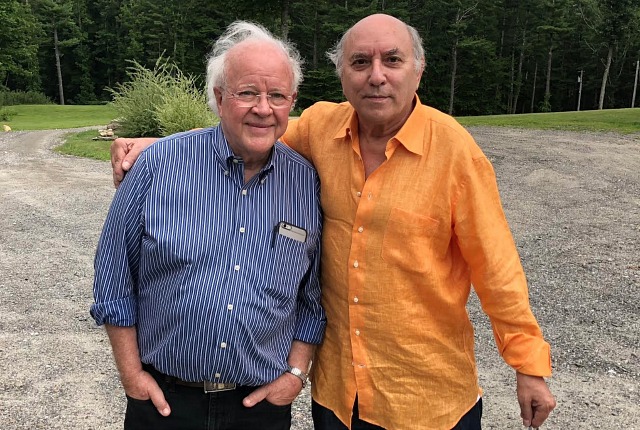 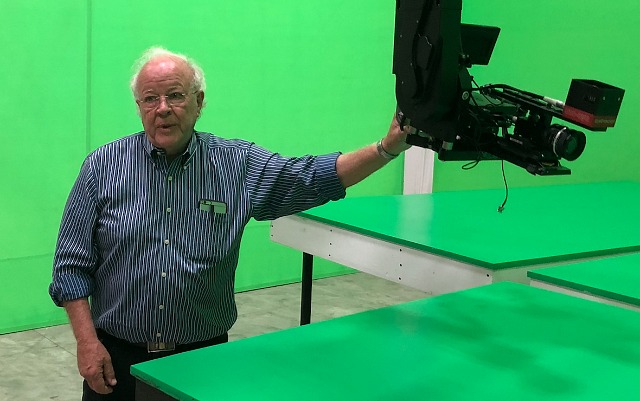 “Harris picked me up this morning at the new Danbury train station. (The old train station, located 150 feet to the east, is where Robert Walker‘s Bruno Antony disembarked in “Metcalf” in Alfred Hitchcock‘s Strangers on a Train.) We drove up interstate 84, over to Route 8, northwest on 44 and then due north on 272.

“We pulled into Southfield a little after noon. We stopped at the Southfield Store for a rest and a light lunch, and arrived at the huge Trumbull compound (four or five large residences, a “mad genius” workshed, a couple of soundstages, a projection facility, a couple of garages, meadows with grazing donkeys and goats and towering trees all around) at 12:45 pm, give or take.

“The Trumbull compound seemed larger than George Lucas‘s Skywalker Sound facility in northern Marin County. Try 50 acres. It’s homey and at the same time a kind of high-tech village. You need to drive to get from one end to the other.

“Full of energy and sharp as a tack, Trumbull led us over to a “Magi pod” theatre, which seats 60 and uses a large, curved concave screen. He explained that Magi integrates virtual reality and augmented reality (seat rumblings), and that it’s the kind of thing that could re-energize moviegoing in an era of fading cinema attendance.

Boilerplate: Magi captures and projects images in 3D, 4K HD and 120 frames per second. Trumbull has developed a prefabricated “Magi Pod” theater, as most theatres are incapable of delivering the right stuff. Magi Pods can be shipped and assembled in a week. Each seat faces the center of a 36-foot-wide by 17-foot-tall screen. A 32-channel, surround-sound system provides strong, needle-sharp audio. The system produces a picture that’s way more immersive than regular 3D or IMAX.

“Trumbull and a collaborator are writing a script called Lightship. I didn’t grill him on the specifics, but it’s some kind of high-tech, high-dynamic, eyeball-popping hair-raiser. Trumbull intends to direct Lightship with most of the principal photography to be captured in the compound.

“Harris and I pushed on a little after 3 pm, and were both back at our respective homes less than three hours later. 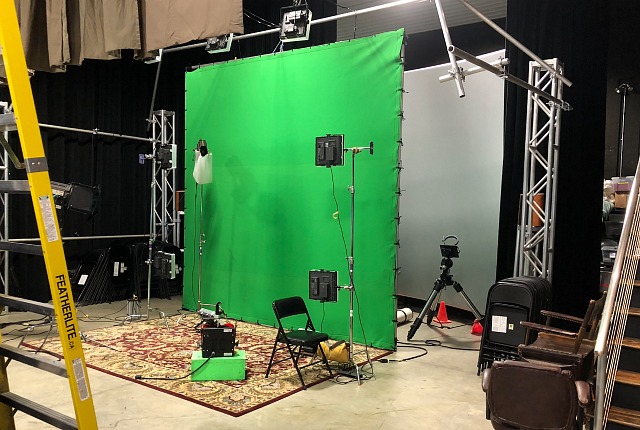 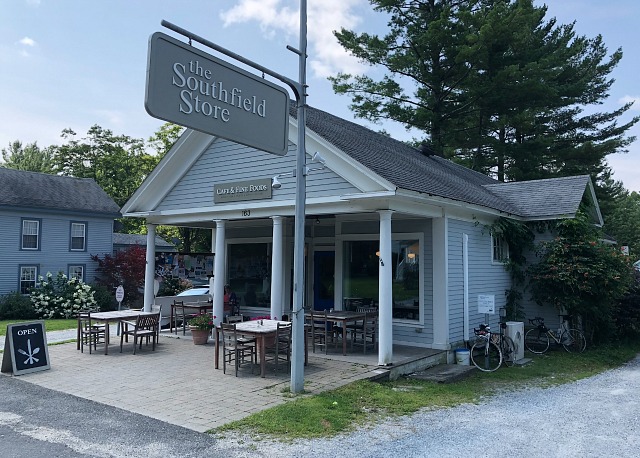 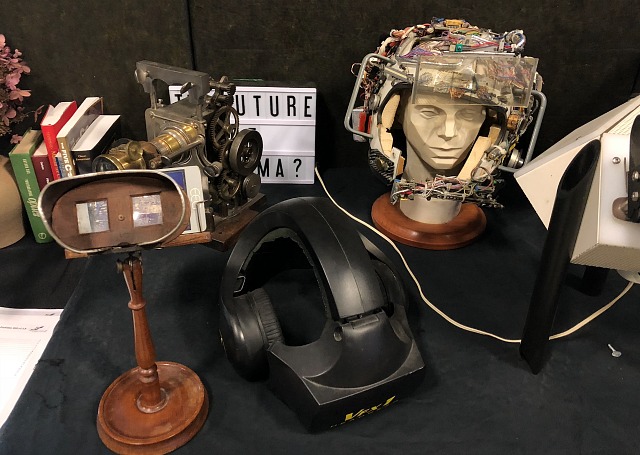 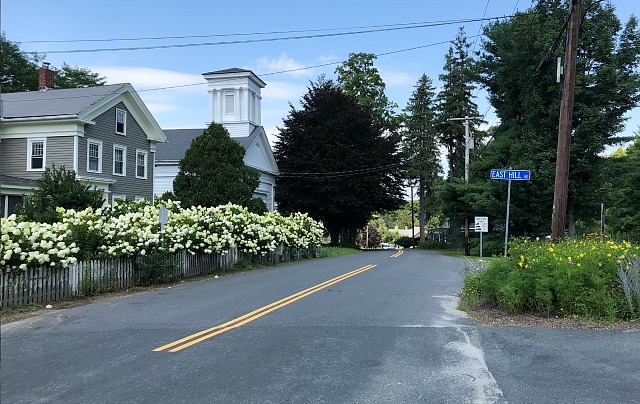 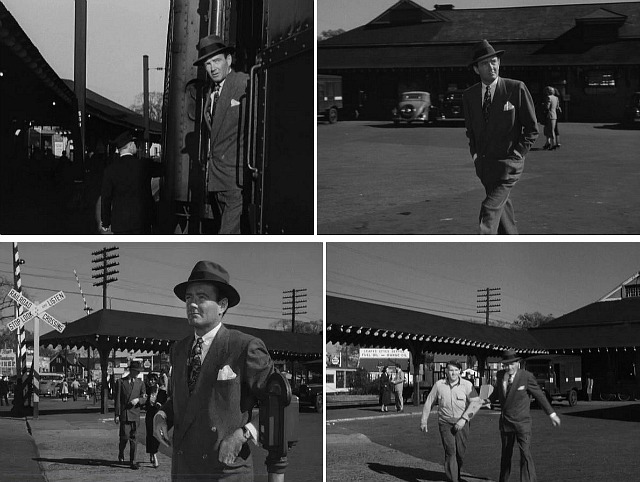 Robert Walker in Strangers on a Train, right outside what is currently known as the “old” Danbury train station, sometime in ’50 or ’51.

HE comment #1: “For years Trumbull was pushing his high frame rate 70mm proces Showscan, which never got off the ground. But when HFR did arrive on screen, albeit briefly, with The Hobbit and Billy Whatzit’s Halftime Walk, not only did viewers not care. Most didn’t like it. Seems like what he was so passionate about, and apparently still is, is the soap opera effect writ large. Wonder what he makes of the mass indifference.

HE comment #2: “He actually addressed this when I saw him at a Q&A a few months ago. He said he thought Ang Lee and Peter Jackson completely botched HFR in their movies and he invented this Magi system to account for the main deficiency he perceived in their productions. He mentioned the “soap opera look” and although I lack the technical proficiency to adequately explain what his solution was, basically it seemed to me he is adding back in the flicker to the projection, i.e. adding black frames to invoke flicker fusion in the viewer which supposedly minimizes or negates the videotape look.

HE comment #3: “I’d have been curious to hear what he said. Because I don’t know that there is a solution. Since objectively speaking there is no problem. The slightly elevated clarity of 30fps video on which they shot soap operas is only unnatural because we are so used to the genuinely unnatural and aesthetically distancing effect of 24fps film. Trumbull logically believed that film would be more impactful at a high frame rate because it would be more immersive, look more real. What he didn’t count on was that after a century of visual conditioning the audience would find more real discomforting,”