Ten days from now millions of emotionally needy Californians will be getting up at 2:45 am to watch the royal nuptials between Prince William and Kate Middleton. I got up at that hour nearly 14 years ago for Lady Diana‘s funeral, but as Hal Holbrook said in All The President’s Men, “This is different.” I think this attitude might put me in the minority with 2 billion viewers expected to tune in. 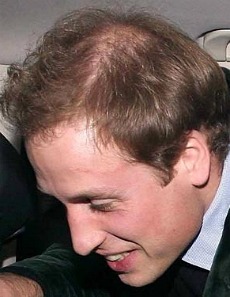 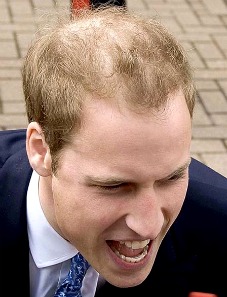 Mostly females, of course. I know for a fact that no self-respecting straight male will pay the slightest heed.

The wedding will be a celebration of an exceptionally lame fantasy that tens of millions of under-educated, Sex and the City-worshipping, Star magazine-reading women the world over hold extremely dear, which is that they might one day luck into marrying an exceptionally rich guy from a rich and powerful family and live a life of fabulous, mostly thoughtless leisure for the rest of their lives. And have kids who will enjoy the same luxuries and get to to do the same thing as adults-with-their-own-kids when they come of age.

My concern here is solely with the baldness of Prince William. Well, not “concern” but a kind of mystification and/or confusion. Baldness can be very cool if you’re Ed Harris or Sean Connery or Bruce Willis, etc. Those guys wear it well and with style, you bet. But the whole bald-is-cool thing kicks in only if you’re middle-aged. Because raging 20something baldness is a kind of tragedy, I feel. Tragic and depressing not just for Prince William (now 28, turning 29 on June 21) but all of us because the metaphor — i.e., the idea that some aspects of your life are unchangable and immovable due to genes, and that we’re all prisoners of our fathers and grandfathers — is kind of shattering.

To me anyway. What is life is not something that can and should be imagined and built and molded according to your own will and creativity and determination? But bald genes say “fuck all that….you’re going to be bald, pal…deal with it.”

There are numerous remedies for what ails Prince William. Ask John Travolta, Elton John, Nic Cage…ask the Hair Club for Men. I’m not saying he should add to what he has now — that would look dopey — but he could, at least, hold on to what he has and maybe thicken things up a bit. He could at least hold on to a kind of royal Jack Nicholson look. But no — he’s apparently ready and willing to lose it all. Because anyone in his condition at age 28 is going to be a total cueball by the time he’s 40 or 45, if not sooner.