“Perhaps no vilifier of Hillary Clinton traipses across the footlights with a bigger satchel of calumnies than Andrew Sullivan, who diagnosed Mrs. Clinton as ‘the hollowest form of political life,’ a ‘sociopath.’ His solo act had and has a symptomatic significance. Published under the aegis of The Atlantic‘s stable of notable byliners, Sullivan’s Daily Dish blog is must-reading among the media elite, those sheep. 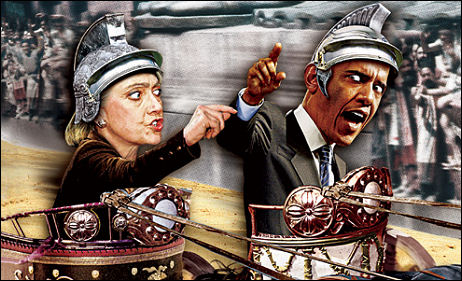 Wolcott’s anti-Sulllivan sympathies aside, the creator of this illustration, a guy named “Darrow,” is clearly anti-Hillary as he’s placed her in the position of Stephen Boyd‘s evil Messala and Barack Obama in the position of Charlton Heston‘s Judah Ben-Hur during the chariot race scene in William Wyler’s film.

“His words extend wider ripples in the ocean of emotion that passes for opinion journalism than did those of his fellow cobblers. In a column for The Times of London entitled ‘The Clintons, a Horror Film That Never Ends,’ Sullivan compared Hillary to Glenn Close‘s bunny boiler in Fatal Attraction — ‘Whoosh! She’s back at your throat’ — and the Clintons as a couple to the fast-running zombies in 28 Days Later. ‘The Clintons live off psychodrama,’ he contended in a classic pot-kettle-black moment.'” — from James Wolcott’s current (June 2008) online Vanity Fair column, titled “When Democrats Go Post-al.”