Three days ago a funny New Yorker piece by David Sedaris about undecided voters appeared. “For as long as I can remember, just as we move into the final weeks of the Presidential campaign the focus shifts to the undecided voters,” it begins. “Who are they?” the news anchors ask. ‘And how might they determine the outcome of this election?’ 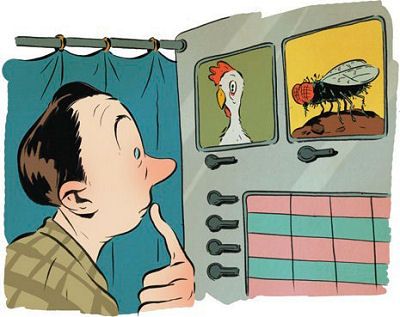 “Then you’ll see this man or woman — someone, I always think, who looks very happy to be on TV. ‘Well, Charlie,’ they say, ‘I’ve gone back and forth on the issues and whatnot, but I just can’t seem to make up my mind!’ Some insist that there’s very little difference between candidate A and candidate B. Others claim that they’re with A on defense and health care but are leaning toward B when it comes to the economy.

“I look at these people and can’t quite believe that they exist. Are they professional actors? I wonder. Or are they simply laymen who want a lot of attention?

“To put them in perspective, I think of being on an airplane. The flight attendant comes down the aisle with her food cart and, eventually, parks it beside my seat. ‘Can I interest you in the chicken?’ she asks. ‘Or would you prefer the platter of shit with bits of broken glass in it?”

“To be undecided in this election is to pause for a moment and then ask how the chicken is cooked.”