The Killing of ZD30

An Atlanticwire.com piece called “Why Zero Dark Thirty Crashed Just Outside The Compound” promises a gripping blow-by-blow account about how and why the Oscar potential of Kathryn Bigelow and Mark Boal‘s brilliant hunt-for-Osama-bin-laden film was snuffed out by Washington power-wielders and Hollywood’s Stalinist cabal. Except it doesn’t do that. It just kind of riffs around and offers impressions and loose recall. 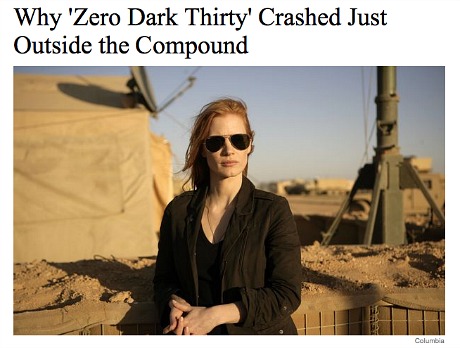 Nor does it get into Sony publicity’s standing by silently when the heat was on during the Xmas holidays, and how Sony didn’t, in my view, respond soon or forcefully enough once 2013 began.

But we all watched the takedown happen, and we all have our ideas why leftie essayists worked so hard to bring hurt. ZD30 opted for honest adult ambiguity instead of blunt moral condemnation in its depiction of the torture applied during the Bush years. For the sin of failing to condemn enhanced interrogation with ethical fire and brimstone, the left got out the whip and lashed Biggy-Boal until everyone had gotten the message.

What mainly bugs me about the piece is that author Richard Lawson gets it wrong right off the top when he writes that “earlier this month” — i.e., January — “the conventional wisdom was that Kathryn Bigelow’s hunt-for-Osama bin Laden film was the one to beat.” Nope — not in my realm. It seemed to me that Zero Dark Thirty was bloodied and on the ropes by Christmas Day, and all but dead as a potential Best Picture winner sometime between the first and second week of January.

It began to get beaten up over the torture thing starting in early December. One of the first counter-arguments came from Tom Carson in a 12.11 prospect.org piece called “Zero Dark Thirty‘s Morality Brigade.” I realized things were getting heavy around the time of Andrew O’Hehir‘s favorable Salon review (12.13), which raised the torture issue without condemning the film in the slightest. (O’Hehir actually called it “something close to a masterpiece.”) But then came that damning letter sent by Senators Dianne Feinstein, John McCain and Mark Frenden, which was reported on 12.19. And then Alex Gibney’s 12.21 Huffington Post slam piece (calling the film “fundamentally reckless when it comes to the subject of torture”) fanned the flames.

Mark Bowden‘s 1.2.13 Atlantic article took issue with the haters and presented a thoughtful pro-ZD30 case, but were people even listening at that point? Naomi Wolf‘s Guardian piece comparing Kathryn Bigelow to Leni Reifnstahl was posted on 1.4. By the time David Clennon, Martin Sheen and Ed Asner expressed opposition to the film on or about 1.12, the game was pretty much over.

Indeed, I voiced concerns about what was happening in a 12.24 HE piece called “ZD30 Needs Strong Last-Ditch Defense,” to wit:

“It makes me sick to my stomach to think that a film as masterful as ZD30 can be taken down by a vitriolic ideological mob, but as Samuel Goldwyn might have said if he were here right now, ‘If people want to smear a film, you can’t stop them.’ Except you can stop them, or Sony can, I mean. They can at least try. They might lose, but where is the honor is letting this teardown happen without standing up and explaining in detail how the accusers are dead wrong or wildly off on their own beam?”

From Lawson’s account: “[By early December] Zero Dark was considerably ahead in the awards tally, taking top prizes from the National Board of Review and the New York Film Critics Circle, among others. The film was perhaps even better reviewed than Argo, and had the added benefit of being a truly serious film about contemporary geopolitics. Argo is similarly about the Middle East and full of shaky-cam intrigue, but it’s a decidedly lighter film, with long comedy sequences and genial performances by cozily likable actors. It’s serious, but Zero Dark Thirty is more intense, newsier, and undeniably grim. It’s grownup and respectable, in other words. Where Argo is entertainment, Zero Dark is enrichment.

“This dark gravitas elevated ZD30 above other Oscar competitors too, from the way less hokey than it could have been but still kinda hokey Lincoln to the cute but ultimately rather small and slight Silver Linings Playbook. Zero Dark‘s lead actress Jessica Chastain seemed destined for Oscar glory herself, winning more awards than her main competitor, Silver Linings‘ Jennifer Lawrence, and generally being viewed as the deserving heir apparent to an older generation of stately talent — your Streeps, your Langes, your Benings. Just a few weeks ago, Zero Dark Thirty had all that going for it!

“But then Argo won a Golden Globe and the SAG (and the Producers Guild award), and, adding insult to injury, Lawrence snatched the prize from Chastain on both occasions. What’s going on? Well, the truth is, it has probably been over for Zero Dark for a while now.”