The L.A. Film Festival kicked off last night with a screening of The Devil Wears Prada at Westwood’s Village theatre. It seemed to go down pretty well with people I spoke to at the after-party, including the tough critics. A tidy, not-quite-pat, cool-mannered studio flick about a tough job and a tough environment. Everyone seemed to love Meryl Streep and Stanley Tucci‘s performance, and felt that lead Anne Hathaway and Adrien Grenier held their own. 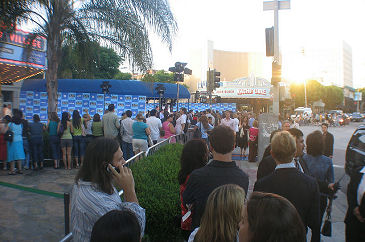 Waiting in the third-class “peon” rush line alongside the Village theatre last night.

It was the usual mob scene before the show began with a lot of traffic pile-up, dozens of SEM goons everywhere, and journalists being handed peon-level blue tickets that meant they had to wait in a kind of rush line on the side of the building. (I was one of them.) You had to pay for popcorn and drinks in the lobby, which is unusual for a premiere, but the food-and-drink at the outdoor after-party was ample and delicious.
(a) SEM security goon outside Village theatre — Thursday, 6.22.06, 7:20 pm; (b) Same position,couple of minutes later Thursday, 6.22.06, 7:25 pm; (c) MPRM publicist whom I won’t identify unless she tells me it’s cool, approaching theatre entrance; (d) An employee of high-powered publicist Mickey Cottrell named Pollyanna (l.) and Islander star-producer Thomas Hildreth; (e) Floral arrangement outside entrance to Village theatre balcony.