I was looking at this boring IMDB poll of popular ’70s movies (you’ll never guess which film came out on top), and out of my temporary non-interest in the same old pantheon of classic ’70s films I was suddenly thinking again of John Flynn‘s The Outfit (1973), and wondering why it hasn’t been issued on DVD. 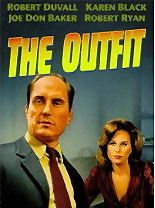 The Outfit isn’t one of those AFI best-of-the’70s movies by any means, but except for a flabby ending it’s a crackling little genre film that’s done almost perfectly. It stars Robert Duvall as an ex-con named Macklin out for revenge against some cold-blooded mob types. Karen Black, Joe Don Baker, Robert Ryan, Richard Jaeckel, Joanna Cassidy and Sheree North costar. Call it a lean, hardboiled, low-key crime drama in the same realm as Charley Varrick. Not as sombre or big-city noirish as The Friends of Eddie Coyle, but a very fine and flavorful film of its type.
The Outfit is based on Richard Stark‘s (i.e., Donald Westlake‘s) 1963 book of the same name, which was apparently part of his “Parker” series. (“Parker”, I gather, is more or less the same guy as “Walker” in the Stark book that became John Boorman‘s Point Blank.)
I mentioned The Outfit as a DVD candidate a little over two years ago…flatline. It’s only viewable on VHS, and has apparently been screened from time to time on Turner Classic Movies. It was originally an MGM release; Warner Home Video now has the rights. WHV honcho Ned Price seems to be napping on this one. Here’s hoping he wakes up and approves a DVD that will include a retrospective docu- mentary and audio commentaries from at least some of the creative principals. Before they’re all dead.