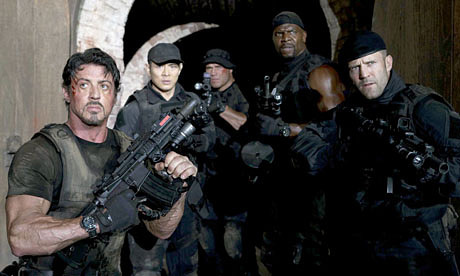 It has to be said that the dopey (and sometimes hilarious) splatter-gore spills that sold Stallone’s last Rambo film don’t pay off as well in The Expendables. Too much time and effort is spent on character embroidery and smart-ass macho camaraderie. It’s fun to see bad guys get blown apart (and for the most part they have no chance against “the boys,” and that feels good on some level). It’s mainly about the good guys just barrelling on through like it’s no one’s business — i.e., the Sex and the City cheer-on stuff — but The Expendables needs to be more than just a show for the home team.

A quality action movie always reaches out to skeptics and fence-sitters. Win that group over and your movie is home free. But director and co-writer Stallone doesn’t even try for this kind of approval. He seems content to operate from his safety zone, and to me that spells lazy-ass. Hell, it is lazy. Would that this film had been assembled by high-grade, top-talent people. I would have been down with The Expendables if it had been a ’90s Jerry Bruckheimer steak dinner. But it’s not — it’s tacos and cheese with chips.

Variety‘s Peter DeBruge said today that The Expendables is “a nearly incoherent all-stars-on-deck actioner that plays like Grown Ups on nitro or a brutish, blue-collar Ocean’s Eleven. The muddled execution falls far short of the talent involved” and “plausibility [doesn’t] seem to have been much of a concern. Basically, the plot serves to support the action sequences” although “the editors [haven’t] assembled the action footage footage in such a way that we can tell where characters are in relation to one another or what’s going on. [The film is] not so indispensable.”