The Why Of It

A friend called a while ago to report that he and a major newspaper critic were laughing out loud during a screening of Jon Avnet‘s 88 Minutes at Sony Studios earlier today. The film has played all over Europe (it opened in France on 5.30.07) and is in fact currently available on DVD is seven or eight countries as we speak. Why did Al Pacino make this thing? For the money, obviously, but are things going so badly in his career that he’s forced to do two movies with Avnet (i.e., this and Righteous Kill)? 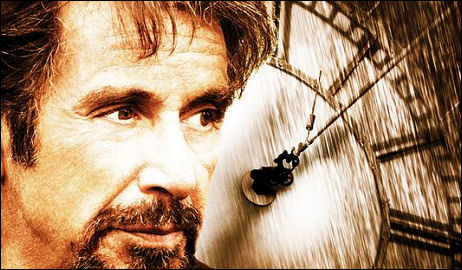 “88 Minutes can’t even live up to its title. With 19 — count ’em, 19 — producers, including director Jon Avnet, ensuring that every aspect of the film, from the script to the star’s haircut, is ludicrous in the extreme, the picture easily snatches from Revolution the prize as Al Pacino’s career worst. Available on DVD in some territories as early as February 2007 and rolled out theatrically in France and elsewhere beginning in May of last year, this gape-inducing fiasco is getting a token domestic release that at least saves its star the indignity of a dump straight to homevid.” — from Todd McCarthy‘s nearly week-old Variety review.