The world is what it is

Time‘s Richard Corliss has written a quasi-lament about the stark divide between the films that critics give awards to and the ones that paying moviegoers actually enjoy and will want to see celebrated on next year’s awards shows. There’s a problem, Corliss suggests, in the (likely) low viewing levels for these shows, given the probability that films like No Country for Old Men, Atonement, There Will Be Blood (an “audience punisher,” says Corliss) and Sweeney Todd will be the nominees. 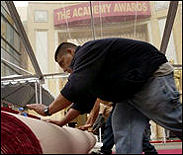 “Moviegoers who are TV viewers don’t want horse races,” Corliss declares. “They want coronations — validations that somebody in Hollywood is ready to honor the movies they love. That won’t happen this year. If the Oscars follow the critics’ prizes, there won’t be a hit film among them — not even the hits that reviewers loved.”

Tough titty. The world that we live in is the world that we live in — deal with it. A relatively small group knows (or at least tries to figure out) the true eternal score and shape of things, and 85% or 90% of the mob outside the gates wants to be entertained with films like Enchanted, I Am Legend, Bee Movie and This Christmas. This is what the mob has always done. What kind of movies did they support big-time in the auteur glory days of the ’70s? Star Wars, The Towering Inferno, Earthquake, Pete ‘n’ Tillie, That’s Entertainment, etc. A tiny fraction of mainstream viewers were paying to see films by Fellini, Bergman and Truffaut in the early ’60s, and yet films by these directors are what everyone thinks of when they list the landmarks of that era.

This is the way of things. Most people have little or no taste. Taste results from a thousand distastes, and yet most consumers can’t be roused to even sample 90% of the films being made today so their judgment is negligible. If the ad revenues for the televised awards shows are going to drop because the gorillas in the malls refuse to watch the films being celebrated, then the ad revenues for the awards show are going to drop…and that’s that. (The Oscar show this year is going to be a mega-disaster anyway with no writers shaping the monologue or the patter.)

The Oscar brand matters a lot — the aura is eternal — but if the viewing audience for the shows is going to be somewhat smaller, then so be it. Reduce the Oscar and Globe show budgets accordingly, downscale the whole magilla, get rid of Gil Cates…live within the real-world limits. It’ll still be a pageant, people will still “ooh” and “aah” at actresses wearing the Vera Wang gowns, everyone will still wear tuxedoes and act like giddy high-schoolers…it’ll just be a somewhat smaller enterprise. Not the end of the world.

Movies were once the reigning popular art form. They are now, for better or worse, an art form that is savored and enjoyed by a relatively small percentage of the populace. The invested, the die-hards, the geeks, the educated, the devoted. This is the final truth of it. The culture has separated. The chasm is deep and wide. Pander to the tastes of the mob and you will lose your soul and go to hell when you die.

What matters is the legacy of the Oscars — the potency of the brand as far as the nomination season is concerned, and the ancillary shelf life of the titles. These things are what count, and why Oscar season continues to excite and thrive and be vital. TV ratings will be what they will be. Whatever to that.