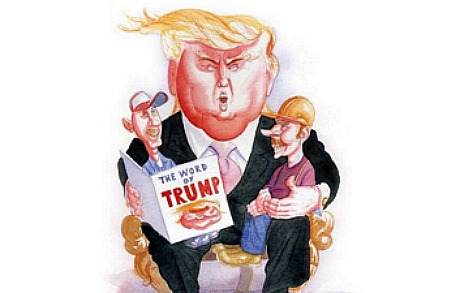 “It wasn’t Beijing. It wasn’t even Washington, as bad as Washington can be. It wasn’t immigrants from Mexico, excessive and problematic as our current immigration levels are. It wasn’t any of that. Nothing happened to them. There wasn’t some awful disaster. There wasn’t a war or a famine or a plague or a foreign occupation. Even the economic changes of the past few decades do very little to explain the dysfunction and negligence — and the incomprehensible malice — of poor white America. So the gypsum business in Garbutt ain’t what it used to be. There is more to life in the 21st century than wallboard and cheap sentimentality about how the Man closed the factories down.

“The truth about these dysfunctional, downscale communities is that they deserve to die. Economically, they are negative assets. Morally, they are indefensible. Forget all your cheap theatrical Bruce Springsteen crap. Forget your sanctimony about struggling Rust Belt factory towns and your conspiracy theories about the wily Orientals stealing our jobs. The white American underclass is in thrall to a vicious, selfish culture whose main products are misery and used heroin needles. Donald Trump’s speeches make them feel good. So does OxyContin. What they need isn’t analgesics, literal or political. They need real opportunity, which means that they need real change, which means that they need U-Haul.”

Here’s a passage that echoes the title and captures Trump’s basic appeal as an authoritarian figure: 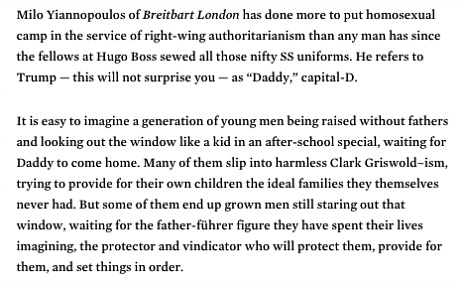