They’re At It Again 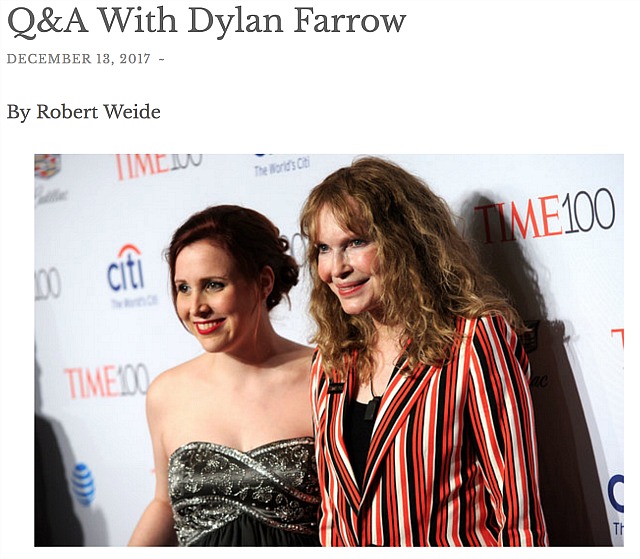 Again, please consider the unrefuted facts as well a couple of portions from the 12.17 Weide piece.

The Weide piece selectively quotes excepts from Dylan Farrow’s L.A. Times essay and responds one by one.

Dylan Farrow: The system worked for Harvey Weinstein for decades. It works for Woody Allen still.

Robert Weide: It’s interesting that Ms. Farrow brings up Harvey Weinstein in her attempt to conflate his alleged crimes with her accusation against Allen. It’s the same tactic used by Ronan Farrow last year, trying to connect Allen with Bill Cosby. By naming these other alleged offenders in the same breath with Allen, it answers the very question asked by Dylan’s headline: “Why Has the #MeToo Revolution Spared Woody Allen?”

Clearly, one thing shared in common by Cosby, Weinstein, Kevin Spacey, James Toback, Donald Trump and several others, are the multiple accusations made against all these men, and for each of them, respectively, the claims are all strikingly similar. Woody Allen faces a single accusation of a single alleged incident made by one understandably furious ex-lover in the middle of custody negotiations, after warning him of her intentions.

DF: Especially painful is that Allen even managed to enlist my brother Moses against me.

RW: Allen hardly “enlisted” Moses to speak out about his life under the Farrow roof. Moses, who is now a licensed marriage and family therapist, reached out to his estranged father after finally “escaping the clan” (his words). Years after his reconciliation with Allen, it was I who first asked Moses to go on the record for my Daily Beast piece. This was followed by a lengthier quote for People magazine, and the revelation of more details in Eric Lax’s recent book, “Woody Allen: Start to Finish.”

Make no bones about it — in the Lax book, Moses refers to the brainwashing tactics used in the household, and is very concise about severe beatings he suffered at Mia’s hands when he would not go along with her pre-scripted narratives, or bend to her will. “Pleasing my mother was very powerful motivation,” says Moses, “because to be on her wrong side was horrible.”

DF: Moses’ comments are devastating, but like so many of the attacks on my story, irrelevant: Moses was not there for the alleged assault.

RW: How interesting that Dylan Farrow would claim that the recollections of an abused child are “irrelevant.” At least it’s a step up from Dylan’s reply at the time Moses first came forward: “My brother is dead to me.” Granted it would be hard for Moses to be present at an event that “allegedly” took place, but he was home on the day in question, along with several other children and adults, and claims that Dylan and Allen were never off alone together. What Moses did witness was Mia “drumming [the story]” of the assault into Dylan’s head, any number of times.

In my first interview with Moses, he told me, “My mother’s worst nightmare was that one of the kids would one day break from the clan and start speaking out.” Moses has only gone public with a fraction of what he witnessed, and after hearing his recollections, I can understand why Mia would have nightmares. This stuff gets real dark, real fast. 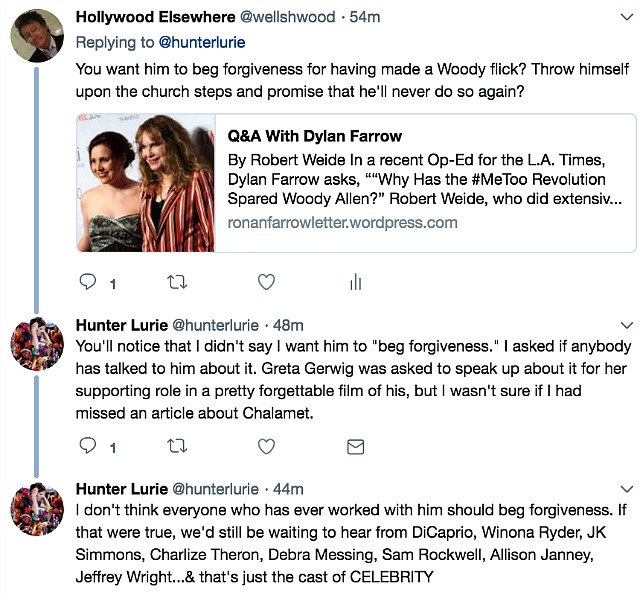 DF: Many point to a questionable 1993 report that concluded no abuse had taken place. The author of that report never interviewed me, and the team later destroyed all of its notes without explanation.

RW: The Farrows would surely love to dismiss this “questionable 1993 report,” but it’s not so easy. This report was actually the summary of an extensive six-month investigation by The Child Sexual Abuse Clinic of the Yale/New Haven Hospital, ordered by the Connecticut State Police, which concluded, decisively and unambiguously, that “Dylan was not abused by Mr. Allen.”

As to why the team felt that Mia’s charges didn’t hold water, the summary states: “We had two hypotheses: one, that [Dylan’s] statements [were] made by an emotionally disturbed child and then became fixed in her mind. And the other hypothesis was that she was coached or influenced by her mother. We did not come to a firm conclusion. We believe that it is [likely] a combination of these two formulations.”

The Farrows can’t seem to mention this study by name, nor will they tell you that the summary of their findings are available on-line for anyone to read. Despite Dylan Farrow’s insistence that she was not interviewed for this investigation, the summary lists the precise dates of the nine interviews conducted with her between 18 September, and 13 November, 1992.

The only thing “questionable” about this investigation is why Judge Elliot Wilk deemed the findings “inconclusive” when they were anything but. Could it be that the conclusion simply wasn’t what Wilk and Prosecutor Maco were hoping for? It’s surely easier to say there is “probable cause” and drop the case, rather than prosecute it and have that report rearing its ugly head throughout the trial. It should also be pointed out that despite Judge Wilk’s dismissal of the report, he never made any contradictory finding.

Judge Wilk laid it off on the fact that only the summary was entered as evidence, and as Dylan Farrow points out, the original notes were destroyed. The Farrow family seems to cling to this point as the magic bullet that allows them to discard the study’s conclusions. So here’s a brief summary of my own research: The State commissioned Yale/New Haven investigation followed the same basic protocol as an FBI investigation. Once a summary has been prepared, it is not uncommon for the investigative body to destroy their notes. This is done, in part, to protect the privacy of the interview subjects. One thing I’m certain of – if the conclusion of the investigation had gone their way, no one in the Farrow camp would be questioning the methodology used by the investigative team.

If anyone wishes to dismiss the Yale/New Haven report, they’ll also need to negate the entirely separate 14-month investigation conducted by the N.Y. State Department of Social Services (the “Child Welfare” office), which reached the same conclusion as Yale-New Haven: “No credible evidence was found that the child named in this report has been abused or maltreated. This report has, therefore, been considered unfounded.” How could all these official investigations get it so wrong? How many people could Woody Allen pay off?

I repeat here a very important point that even many of Allen’s supporters do not fully grasp: Allen wasn’t tried and found “not guilty” of child molestation. There was no such verdict, because there was no such trial, because there was no charge, because of a lack of credible evidence (in the house that Mia built). The “trial” you hear so much about was a custody trial, not a criminal one. Woody Allen was never charged with abuse of any kind. As a legal matter, this case has been closed for 25 years. Ronan Farrow is a lawyer, and he knows this, but the Farrows still want Allen found guilty in the court of public opinion and they want to shut him down in the business.

This is not called justice. It’s called vengeance.

Trying to denigrate Woody Allen’s career in the name of a movement, no matter how essential or virtuous, doesn’t exactly score one for the “good guys.” Once the dust settles, history tends to be unkind to causes that ignore due process or display indifference towards collateral damage. Everyone should be very careful where they tread here. That goes for #MeToo.