It turns out Oscar telecast producers Mike DeLuca and Suzanne Todd liked my notion about bringing back Warren Beatty and Faye Dunaway to present an Academy Award on Sunday, only they’ve done me one better.

TMZ reported last night that Beatty and Dunaway will in fact present the Best Picture Oscar at the ceremony’s conclusion and, not as my “Mickey One” piece suggested, a “minor” award “for dignity’s sake.”

Excerpt: “[TMZ’s] Oscar sources tell us Warren and Faye both just showed up at the Dolby Theatre and rehearsed the big moment. We’re told they were shuffled onstage together very quickly to run through their bit. They went through their lines twice. She began by saying, ‘Presenting is better the second time around.’ Beatty followed up with, ‘The winner is Gone with the Wind. We’re told the writers are still putting finishing touches on their lines.” 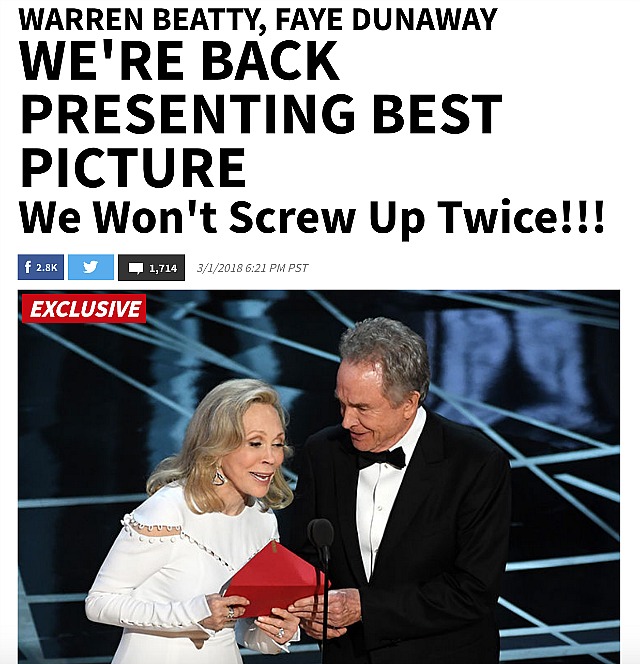 Here’s HE’s re-written version of “Mickey One,” adjusted to include the TMZ scoop.

DELUCA: Warren!
BEATTY: (To someone else) Hah, okay. (into phone) Mike!
DELICA: So what up?
BEATTY: Look, Mike, I want another shot.
DELUCA: (grimacing) Aww, come on, Warren.
BEATTY: And I don’t mean presenting some minor award. I want to present the Best Picture Oscar again. Actually, Faye and I together.
DELUCA: (uncomfortable) Whoa!
BEATTY: And you know why you’re going to agree?
DELUCA: Tell me.
BEATTY: Because that Price Waterhouse fuck-up, which you, Mike, are responsible for despite the circumstances…
DELUCA: C’mon, man…
BEATTY: Your show, your responsibility! And that ridiculous stupid fucking error made me look clueless and doddering.
DELUCA: Warren! Everyone in the world knows it wasn’t your fault!
BEATTY: It made me look bad. The gossips and columnists inferred I was the old guy who fucked up, and you owe me for allowing that shit to happen.
DELUCA: You feel crestfallen about last year. I hear you.
BEATTY: I have almost 60 years in this business, Mike. Faye has over 55. Millennials and GenZs don’t know us, but the over 40s do. Okay, the over-50s. We have some standing in this industry. We just don’t want to go out like a couple of clowns.
DELUCA: I don’t think you flubbed it.
BEATTY: Remember what Kimmel said?
DELUCA: It wasn’t your fault, dude.
BEATTY: Kimmel said, “Warren, what did you dooo?” Well, I’ll tell ya what I’m gonna do on March 4th. I’m gonna present that Best Picture Oscar again, me and Faye, and this time we’ll get it right.
LORNA (obviously listening in) I think it’ll take strain off the show, Mike.
DELUCA: (caving) All right. But no hemming and hawing at the lecturn, Warren!
BEATTY: No hemming and hawing. 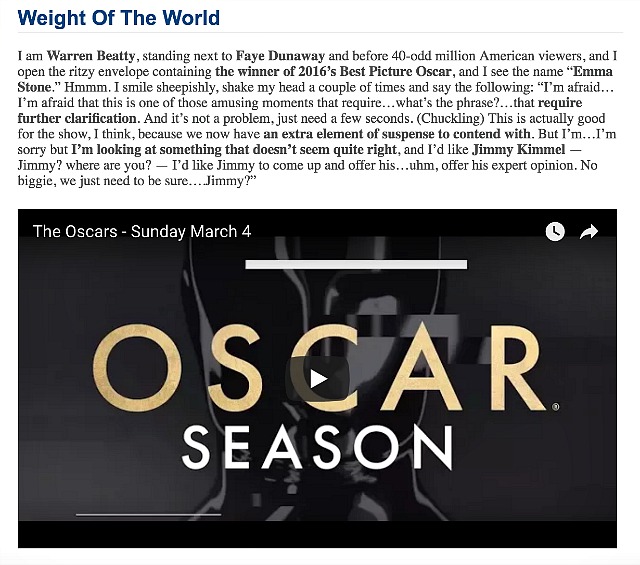