This is not a parody cover of The Advocate. It’s “real world”, and it’s on the on the Advocate site right now. (I’m not sure about the newsstands.) The piece, written by arts and entertainment editor Alonso Duralde “looks at superheroes and their appeal to gays and lesbians,” the blurb says. I’ve never detected anything intrinsically or suggestively gay about the D.C. Comics’ Superman character, and you know Superman Returns director Bryan Singer wouldn’t begin to think about pulling a Joel Schumacher move…not with all the pressure on him and the film. 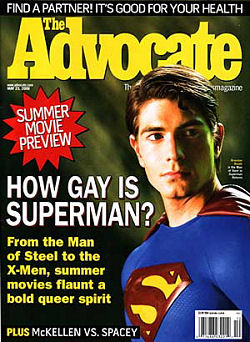