It’s been a long while — two or three months, at least — since I’ve seen Alex Gibney‘s Gonzo: The Life and Work of Hunter S. Thompson (Magnolia/HDNet, 7.4), which I mostly enjoyed and fully respected. David Carr‘s story about it in the 6.29 N.Y. Times has jarred my memory somewhat. And yet mainly I’m reminded that my primary impression of Thompson’s life can be summed up in four words: “Wow, what a waste.” 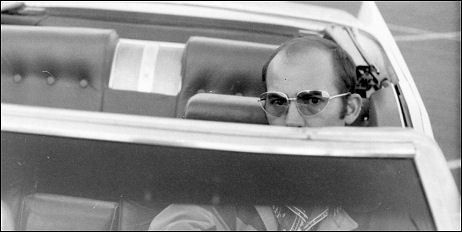 Hunter S. Thompson sometime in the mid to late ’60s, to judge by his hairline.

The “wow” part — Thompson’s productive years from the mid ’60s to mid ’70s — is what 90% of Gibney’s film is about. The largely non-productive downturn phase — the last 28 or so years of his life from ’77 until his suicide in ’05 — occupies, no exaggeration, maybe 10 or 12 minutes of screen time, if that. It’s understood, of course, that ruination from booze and drugs is not interesting because there’s absolutely nothing say about it except “and then, lacking the courage to kill himself quickly, he decided to slowly commit suicide on a snort-by-snort, bottle-by-bottle basis.”
And yet Carr’s sentence about Thompson’s coke-and-tequila poisoning carries a certain poignancy: “By the time most of America knew who Thompson was, he was pretty much washed up, having gradually been overtaken by his own legend, with steady assists from the bottle, the drugs and his coven of enablers.” Gibney’s handling of it, by contrast, is a little on the hurried and perfunctory side.
The only big problem I had with Gonzo is the pop-tunes soundtrack. Gibney has used cut after cut of the music that was big in the late ’60s to mid ’70s, but listening to these songs, trust me, will drive you up the wall.
What prevented Gibney, an extremely smart guy, from realizing that it’s virtually impossible for a person watching a doc about the social upheavals of the ’60s to listen the Youngbloods singing “Let’s Get Together” without wanting to fire a bullet into his or her right temple? There is no other reaction to that song at this stage of the game. You hear those fucking lyrics — “C’mon, people now, smile on your brother, try to love one another right now” — and you want to die as soon as possible.
I felt this over and over as Don MacLean‘s “American Pie,” Jimi Hendrix‘s “Hey Joe” and Janis Joplin‘s “Piece of My Heart” and I don’t how many other ’60s standards were heard. These songs, of course, are part of the 245-song repertoire that every classic-rock radio station has been playing for the last 35 years and torturing everyone to death with. Has Gibney ever heard of B sides? Of ’60s bands and tracks that don’t make people want to jump off the top of 30-story office buildings? Apparently not.