Dwayne Hickman, forever and indelibly identified as the star of The Many Loves of Dobie Gillis (September ’59 to June ’63), passed this morning at age 87. Hugs and condolences to friends, fans, family, former colleagues.

And by “former colleagues,” I’m partly referring to Dobie Gillis costar Warren Beatty, whose path and potential in life led to historic accomplishments, Oscar nominations and wins, and the altering of cinematic culture. During his heyday Beatty was an extraordinary, legendary, real-life hound while Hickman only played one, and the kind of hound, by the way, who never really experienced an erection (even an erection of the mind) or coped with primal lust and longing and hot blood.

For Dobie Gillis‘ romantic passion was more in the realm of Percy Bysshe Shelley than Lord Byron — he sought love and assurance and the perfect mating with a sister of the spirit — a soul priest in search of the perfect nun. It’s not that Dobie tried and failed to get laid during the four-year run of the series — he never even seemed cognizant of the idea. Wokester prudes can point fingers at Beatty’s off-set behavior in the ’60s, ’70s and ’80s, but at least he was alive and pulsing on the planet earth. 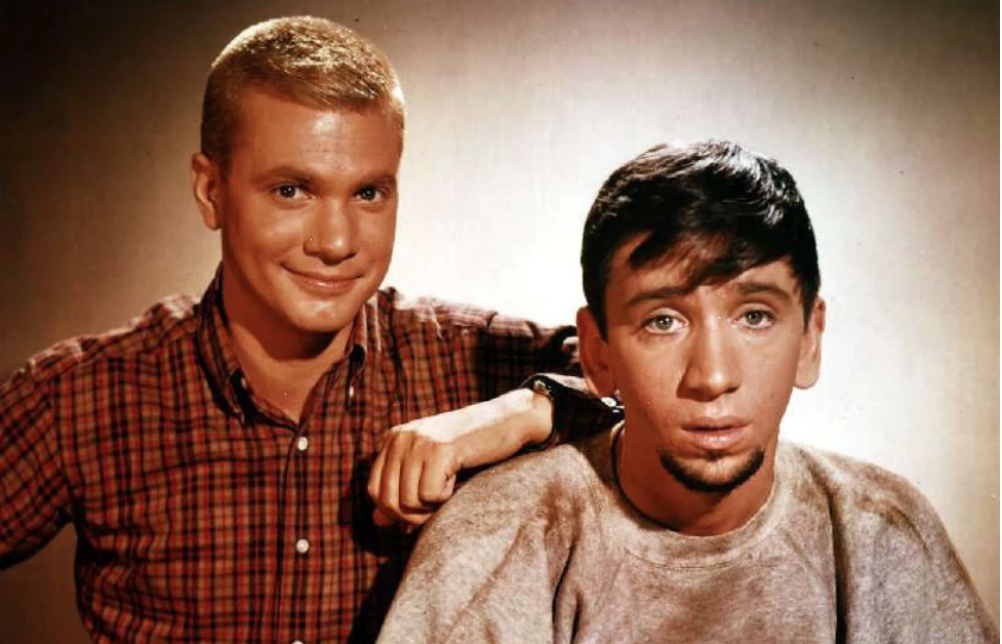 But Hickman’s Dobie was kind and considerate and thoughtful — he believed in middle-class values (the show was one of Hollywood’s final expressions of the sleepy and hermetic 1950s, ending only a few months before the murder of JFK and the onset of ’60s social turbulence) and he identified, remember, with Pierre Auguste Rodin‘s “The Thinker”.

Born in 1934, Hickman costarred with the recently departed Dean Stockwell in Joseph Losey‘s The Boy With The Green Hair (’48) and was, at the time, considerably taller than Stockwell.

Hickman’s first big score was a recurring role on The Bob Cummings Show (’55 to ’59). He also played a Marlon Brando-like rebel in Rally ‘Round the Flag, Boys! (’58). Hickman began playing the teenaged Gillis at age 25, and with blonde hair yet. (His hair reverted to brown in subsequent seasons.) His biggest post-Gillis score was the role of “Jed” in Elliot Silverstein‘s Cat Ballou (’65), along with costars Jane Fonda, Lee Marvin and Michael Callan.

Incidentally: Hollywood Elsewhere has always identified with Bob Denver‘s Maynard G. Krebs, the difference being that while Maynard was known for freaking out whenever he heard the word “work”, HE freaks whenever anyone mentions the word “woke.”

January 9, 2022by Jeffrey WellsNo Comments
« Previous post
Movie-Making As It Used To Exist Has Been “Called Off”
Next post »
Best Narrative