A little more than three years ago Andrew Sullivan, then a New York “Intelligencer” columnist, lamented how rabid campus wokesterism was becoming increasingly prevalent in various liberal workplace environments, and how “the whole concept of an individual who exists apart from group identity is slipping from the discourse.”

The article was titled “We All Live on Campus Now” (2.9.18). I re-read it this morning, and it’s kind of horrifying to realize that the Cultural Marxist insanity that Sullivan saw as a gathering manifestation has now become a ruling doctrine, certainly on Twitter and in big-media circles.

“The idea of individual merit — as opposed to various forms of unearned ‘privilege’ — is increasingly suspect,” Sullivan continued. “The Enlightenment principles that formed the bedrock of the American experiment — untrammeled free speech, due process, individual (rather than group) rights — are now routinely understood as mere masks for ‘white male’ power, code words for the oppression of women and nonwhites. Any differences in outcome for various groups must always be a function of ‘hate,’ rather than a function of nature or choice or freedom or individual agency. 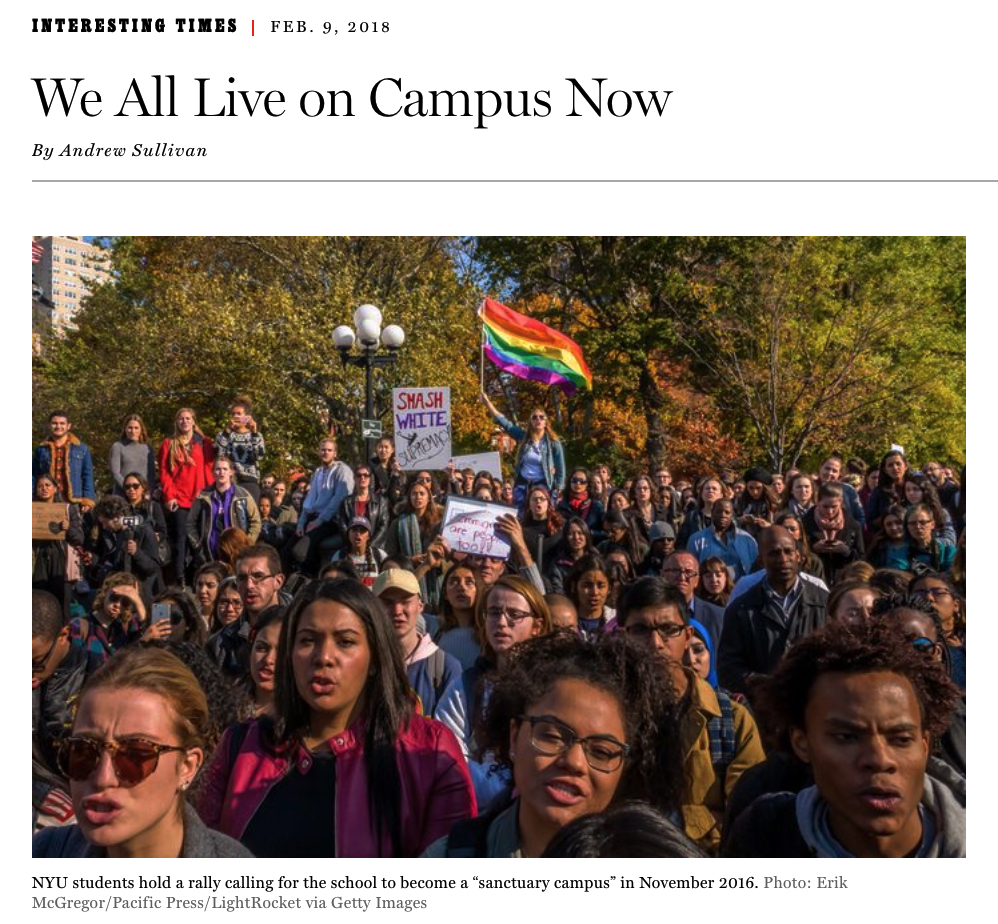 “And anyone who questions these assertions is obviously a white supremacist himself.”

The culture, he explained, “is now saturated with the concept of ‘your own truth’ — based usually on your experience of race and gender. It is now highly controversial for individuals in one racial/gender group to write about or portray anyone outside it — because there is no art that isn’t rooted in identity. Movies are constantly pummelled by critics not for being bad movies but for being ‘problematic’ on social justice. Books are censored in advance by sensitivity readers to conform with ‘social justice’ protocols.”

Anyone paying attention to the here-and-now will tell you that wokester terror hasn’t ebbed in the slightest since early ’18, and, despite Trump being out of the White House and Biden policies doing a lot to calm people down, is probably even stronger. This is not opinion or conjecture. This is reality.

But not on HE comment threads. For every time that the worrisome presence of woke social Marxism (which is roughly equivalent to the spectre of German aggression in 1938 from a British perspective)…every time woke baddies are mentioned there are certain denialists and pooh-poohers who always pipe in with the same crap…”you’re being tiresome,” “stop obsessing”, “calm down already” and “threatened much, Jeff?” They know who they are**, and I’m getting really sick of their bullshit.

A friend wrote this morning that “the weird thing in all of this is the number of people — i.e., more than half of Jeff’s posting readers — who do not get it because they simply cannot see what is going on. They are such lockstep, go-along-with-the-crowd personalities that they think Jeff is talking about some fantasy in his head, rather than a genuine universe of real ideas that can no longer be expressed in the public square of mainstream media.

“Every time one of them says ‘Give it a rest, Jeff!’ I think: Here is someone who is truly, definingly clueless. The house is on fire, and they just think it’s a warm day.