Ten years ago James Cameron‘s Titanic had been playing for one week (it opened on 12.14.97) and had made $28 million and change. Nobody knew how far it would go or how deeply it would connect, but I suspected — as did a lot of movie journalists and industry types who were invited to the first wave of screenings — it would be huge.

I had first seen it on a rainy afternoon in late November on the Paramount lot. I took Matt Drudge as my guest, and I remember feeling shaken and moved as I walked back to my car in the early evening. I didn’t share my feelings with Drudge nor he with me, but we were both a little beside ourselves. I knew in my heart of hearts that 93% of Titanic was only good (or pretty good), but that the last 15 minutes were heartbreaking, and that the final sequence was a levitation.

Nobody will ever feel the Titanic vibe the way a lot of us did back then. It was ruined, in a sense, by the worldwide mob loving it so much. The more popular it became with K-Mart Nation, in fact, the less affection I was able to feel for it. Or express my feelings for with any freedom. I feel as if I’ve been living in a Titanic gulag every since. The hip backlash kicked in a month or two later, and now it’s hard to find anyone in the intelligentsia who will admit to even liking it. It’s a deeply despised film.

And yet the negative feelings about it — almost all of this coming from know-it-all film snobs — over the last ten years have convinced me with more certainty than almost anything else that I’ve seen and felt over my 27 years of writing about movies that the smarty-pants crowd is sometimes deeply full of it. 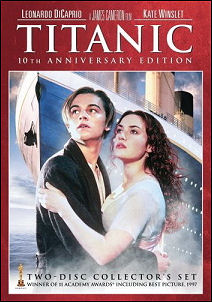 Titanic didn’t make more money than any film in the history of motion pictures because it provided cheap emotional junk-food highs to teenage girls swooning over Leonardo DiCaprio. It did this because it touched people (including my cranky, emotionally shut-off father) in a way that, like it or not, was extremely primal and shattering. I’m not going to explain the how and why of this. Everyone has their views pretty well sorted out about this film. I’m just saying that when a film that connects this strongly and deeply it has done something right.

At the very least Titanic provided a payoff in such a way that the first 90%, some of which was merely sufficient and some of which was admittedly mediocre, served as a mere preamble or build-up. The most affecting films always do something like this. They simmer and marinate and take their time with the various ingredients and themes, and then along comes the last 15 minutes and it all starts paying off like a slot machine.

Obviously you have to watch these films to the end or the whole effect collapses.

I was friendly and talking occasionally with Owen Wilson back then, and I told him over and over how great the finale was. I took him to a Titanic screening about a week or so before it opened, in the very same Paramount lot theatre. He hated it. He left the theatre without saying a word less than 30 minutes in.