The biggest tech headache of the year is about to take place in Toronto. There is no film festival anywhere in the world that makes people like myself suffer like the Toronto International Film Festival. Compared to Cannes and Sundance and given the generic expectation level of a major film festival, Toronto wifi is similar to the wifi in Oxford, Mississippi. Or nearly. 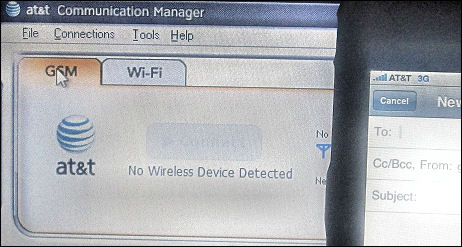 My iPhone was showing five bars this morning but the AT&T Communication Manager (i.e., the air card software) was saying no dice. It does this from time to time. Actually, more often. Technology lets you down all the time.

A festival without lots of plentiful free wifi all over the place is a drag — that’s all there is to it. Every journalist who attends needs to constantly file, and getting online in Toronto — or more particularly in the areas near theatres and screening rooms — has always been a pain in the neck. Wifi is obtainable, of course, but a lone-wolf journalist has to work and scheme and pay and sometimes walk blocks out of his way in order to get it.

Sundance is sometimes a tough wifi situation, but it’s workable. You can always find it here and there, and my AT&T air card works most of the time. And there’s always the option of Starbucks, wifi cafes and hotels. There’s no using the air card in Cannes because of the ridiculous expense, but there’s good wifi everywhere inside Cannes’ Grand Palais, which has two huge press salons, as well as inside the American Pavillion and in the various hotels on the Croisette. So it’s a pretty good deal in both places.

But good free air in Toronto is elusive and at a premium, and year after year festival chiefs have made no real effort to improve things. There’s only one lousy wifi room inside press headquarters at the Sutton Plaza hotel (a sea of flat screens that are always occupied with a line of people waiting to use them), except there’s no desk space for people with their own laptops to sit down and work upon, as you can do in Cannes. As far as I know the Sutton flat-screen room is pretty much it as far as festival-supplied “air” goes.

You can always go to a Starbucks (I pay them a monthly wifi fee), but Starbucks can be extremely crowded and you never know. Or you can go to a wifi cafe that sells air, but the cost of this adds up. As in France, AT&T air cards are unusable in Toronto due to absurd fees. 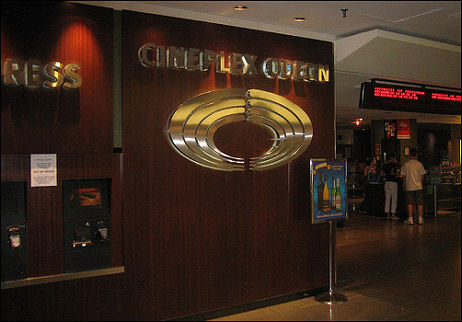 It would stand to reason that wifi galore would be available inside the press screening headquarters at the Bloor/Bay Manulife Center, which houses the multi-screen Cineplex Odeon Varsity plex. I’m always looking to file between screenings and there’s a cafe adjacent to the theatre concessions stand that would be perfect for this, but the Cineplex Odeon has never offered wifi, not even on a pay-as-you-go basis. They clearly don’t want people like me hanging around. It’s obviously a deliberate policy.

Festival staffers have use of private-password wifi at the Cineplex Odeon, of course, but journalists aren’t allowed to use it. Naturally! Year in and year out, and things never change. An American visitor can’t get online inside the Cineplex Odeon unless he/she has a Canadian wifi account and an air card, and who wants to spring for that?

The only way to file between Cineplex Odeon Varsity screenings is to walk down to the Starbucks on the level below, but the place is always full of non-working customers taking up tables and just lolling around, reading books and chit-chatting and whatnot. And there’s only one wall outlet if the computer battery is running low. And 80% of the time someone else is always using it for some non-journalistic purpose, or the tables around it are always filled with 20-something women who are always giggling and hanging around and sipping lattes for interminable periods.