I saw The Cove last night at a special celebrity-attended screening, and I’m now officially and emotionally among the ranks of the persuaded and the blown-away. It’s easily one of the best films I’ve seen this year, and without question my choice for the best documentary of 2009 so far. It’s this year’s Man on Wire — almost certain to keep playing and gathering steam all through the year and into Oscar season.

You don’t come out of The Cove simply saying “really good movie!” (although you do). You come out The Cove wanting to fly the next day to Taiji, Japan, in order to kick some Japanese dolphin-slaughtering ass. You come out furious and moved and converted and dug in.

No one should get the idea that The Cove is primarily a classroom-lecture piece and an eco-activist movie, although it is obviously those things in a political undertow sense. Because it’s first and foremost a very well-made, thoroughly watchable murder-mystery — a gripping and entertaining sit by any standard. (Unless you happen to be, you know, an idiot.) That’s right — murder. As in seawater turning pink and then blood red.

Anyone who’s ever watched the various Flipper entertainments (the two early ’60s movies, the ‘ mid ’60s TV series, the 1996 feature with Elijah Wood) or has visited any kind of Sea World amusement park needs to see it especially. And no wimping out (or allowing the girlfriend/wife to steer you away from it). Stand up, man up and buy a ticket when it opens on 7.31.

The Cove is essentially about the exploring and exposing of a grisly annual slaughter of 2500 dolphins that happens each September in Taiji. It’s also a kind of love sonnet about dolphins — their immense intelligence, friendliness to humans, spiritual and physical beauty, etc.

It follows that it’s also a movie about infuriating bureaucratic stupidity and mass mercury poisoning, since dolphin meat (which the Taiji slaughterers covertly sell to the world) is especially heavy with the stuff. 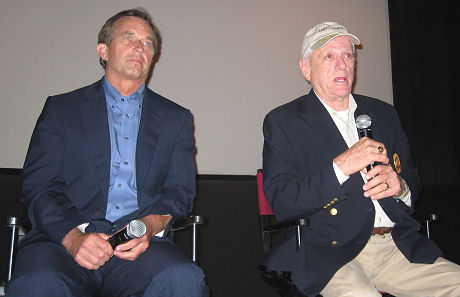 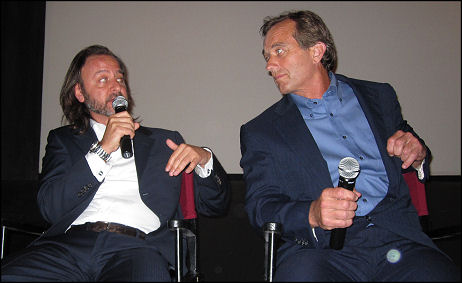 And it’s finally and fundamentally a portrait of an obstinate hero and an extremely guilty-feeling older guy named Richard O’Barry, a former Flipper trainer-turned-activist.

O’Barry acknowledges time and again that he bears responsibility for the popularity of dolphins and their forced-labor imprisonment at various sea parks worldwide, since he was the guy who caught and trained the five dolphins who played Flipper on the famed TV series that ran from ’64 to ’68.

The Cove‘s central though-line is an effort by O’Barry and a team of activists to covertly film/tape the annual slaughter, which Taiji locals naturally don’t want anyone to see much less know about. Prior to The Cove‘s debut showing at last January’s Sundance Film Festival, I’m not aware that anyone outside of marine activists knew anything about it, including Japanese citizens.

The film is basically reiterates the truism that all ugly and ghastly things are caused by greed, denial and stupidity.

It’s really quite impossible to watch the finale — the footage of the mass harpooning of hundreds of dolphins that O’Barry and friends have endeavored to capture — and not clench your teeth and fists. 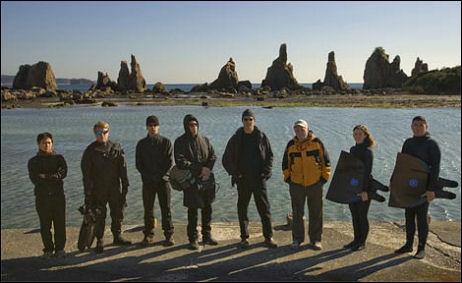 Team behind shooting of The Cove.

Plus the mislabelling of dolphin meat is appalling and sickening given the widespread mercury poisoning that consuming it has caused. And the continued refusal of the International Whaling Commission to classify dolphins as cetaceans (which would help to protect them from being murdered) as they grovel and kowtow before Japanese economic interests is nothing short of disgusting.

Technically The Cove is as sharply shot, cut and assembled as a piece like this could possibly be. You get a sense immediately that this is no run-of-the-mill documentary but a first-rate edge-of-the-seater, procedural and hide-and-seek paranoid thriller.

The Cove was directed by Louie Psihoyos. The exec producer is multimillionaire Jim Clark. The excellent editing is by Geoffrey Richman. The writing is by Mark Monroe. And the film was basically shepherded and sharpened into shape by Fisher Stevens.

A q & a panel happened after the screening with Clark, Stevens, Kennedy and O’Barry speaking and taking questions. Ben Stiller, who flipped for The Cove after seeing it recently at the Nantucket Film Festival, introduced the film at the very beginning. The after-party at Rouge Tomate was thrown by Peggy Siegal. 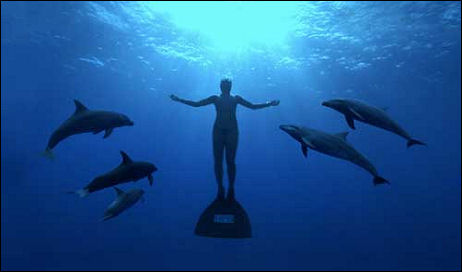 Here‘s that Dolphin Lady/Gini Kopecky-Wallace review that ran two or three weeks ago. My favorite line from her piece: “Watch crazy-brave people doing crazy-brave things and there’s no telling what other people will decide they can do.”

And here’s a link to a “get involved and do what you can” site sister site affiliated with The Cove. And here’s an ’07 story about what Hayden Panettierre did 18 months ago to try to bring attention to the Taiji slaughter.