Totally Cronicas Those heading to

Those heading to the Sundance Film Festival next week will be messing up hugely if they don’t catch Cronicas, a creepy investigation piece and a penetrating morality tale about a tabloid TV news team on the trail of a serial child killer.
It’s the first serious high-performance film I’ve seen this year, and if there’s any justice in the world it’ll be among the five Best Foreign Film Oscar nominees that are being announced on 1.25, along with Downfall, Les Choristes, The Sea Inside and House of Flying Daggers.

Chronicas shouldn’t be missed, partly for the impact of the drama itself (which holds onto its ethical focus from beginning to end, and never drops into an excitement-for-excitement’s-sake mode) and because it heralds the arrival (*) of a major new Spanish-language director — 32 year-old Sebastian Cordero.
< ?php include ('/home/hollyw9/public_html/wired'); ?>
It’s not about catching the bad guy as much as a study of corruption in an investigative reporter (played by the always feisty John Leguizamo, in his first Spanish-speaking role), who may be just as threatening, the film implies, as the child-killer he’s trying to hunt down.
Set in a low-income area of Ecuador and 98% Spanish-spoken, Cronicas boasts a first-rate cast (Leguizamo, Damian Alcazar, Leonor Watling, Alfred Molina, Jose Maria Yazpik) and has been produced (or would grandfathered by the more appropriate term?) by Alfonso Cuaron and Guillermo del Toro.
It was filmed in Babahayo, a capital city of the province of Los Rios, apparently one of Ecaudor’s poorest areas. A series of child murders, all the apparent victim of a serialist called “the monster,” has caught the attention of a three-person news team shooting for a show called “Una Hora con la Verdad” (“An Hour with the Truth”), which is hosted in-studio by Molina’s character.

Jumping right into this cauldron is a hot-shot TV reporter named Manolo Bonilla (Leguizamo), along with his producer (Watling) and cameraman (Jose Maria Yazpik).
And they happen to be right there and shooting when a seemingly decent, soft-spoken salesman named Vinicio Cepeda (Alcazar) accidentally hits and kills a young kid with his truck. This almost gets Cepeda killed by an angry mob.
When Bonilla later visits Cepeda in jail, where he’s awaiting trial for manslaughter, what seems to be a major scoop is dropped into his lap. Cepeda tells Bonilla that he’s met the serial killer and can provide crucial information about him…which he’ll pass along in trade for a sympathetic TV story about the accident, which may lead to his legal exoneration.
Cepeda’s information (or some of it, rather) turns out to be solid, which of course leads Bonilla to decide to keep his scoop from the cops so he can make a big splash. And this is all I’m going to say, except that the movie has a riveting ending that doesn’t leave you alone.
Cronicas will be released in the U.S. on 5.27 by Palm Pictures, and then — mark my words — it’ll eventually be remade by some U.S. producer-director team and almost certainly downgraded, because they’ll jazz up the standard-thriller aspects and probably diminish the moral element, which is what makes Chronicas so absorbing in the first place. 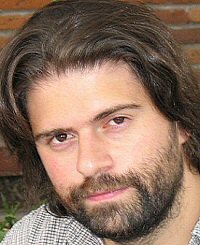 I wasn’t in Toronto last September when Cronicas played the festival there, but I’m kicking myself for not even making an effort to see it when I was in Cannes last May.
As we were coming out of last Wednesday night’s screening, my 15 year-old son Dylan said, “It’s funny, but it’s like almost all the really good films these days are being made by guys from Mexico and South America.”
And Spain, I added. It’s certainly seemed this way over the past three or four years. It’s always fascinated me how the Movie Gods seem to serendipitously pick certain countries and cultures to produce especially vital and profound films during a given period.
The industry crowd, in any event, can now add Cordero to the Spanish-speaking cool-cat list headed by Alejandro Gonzalez Innaritu (21 Grams, Amores Perros), Guillermo del Toro (Hellboy), Alejandro Amenabar (The Sea Inside ), Pedro Almodovar (Bad Education), Fernando Meirelles ( City of God), Julio Medem (Sex and Lucia) and Fabiane Beilinsky (Nine Queens).

Cordero, who went to NYU film school and is fluent in English, is repped by UTA’s Stuart Manaschil. His Sundance p.r. rep will be Kristi Avram of Palm Pictures
Has anyone out there seen Cordero’s first film — Ratas, Ratones, Rateros?
Amazon says the Vanguard Pictures DVD has been available since March ’03.
(*) For those who didn’t see Cronicas last year at the Cannes, Toronto or San Sebastian film festivals, I meant to say.

I was just reading a press kit biography of actress Camilla Belle, whose first name is pronounced Ca-MEE-la. She’s 18, lives in Los Angeles and has acted in about 18 movies (including TV movies). She’s costarring in two Sundance movies — The Ballad of Jack and Rose and The Chumscrubber. I’ve seen her in Jack and Rose and she’s quite good in it, and has become quite beautiful
But for a mere 18 year-old she’s way too accomplished. I just think there should be limits. 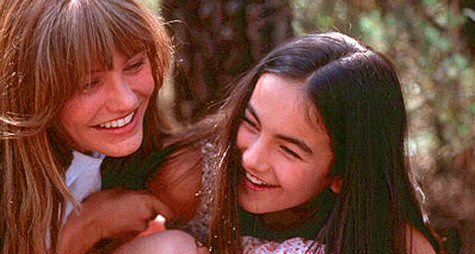 Camilla speaks “several” languages fluently, the bio says, and she’s also “an aspiring classical pianist.” I’m hoping that means she’d just like to play piano one day with a certain assurance. She’s also been “actively involved” (as opposed to being inactively involved?) in various charities, and has become an international spokesperson for Kids With A Cause.
She was also recently invited to speak at the United Nations as part of the Earth Day celebration in New York, the bio adds.
There’s an ancient Chinese curse that goes, “May you peak in high school.” Many of the kids I knew who were introverted and withdrawn and anti-social when they were sixteen or seventeen have turned out to be very (or at least fairly) interesting adults, for the most part, whereas the goodie-goodies who ran for Student Council and got straight A’s and whatnot have mostly put on weight and become alcoholics and bad dressers.

Here we go again with the dueling Christmas truce movies, except now there are three instead of two.
On 12.17 I reported that two high-profile directors — Vadim Perelman (House of Sand and Fog) and Paul Weitz (In Good Company, About a Boy) — are both planning to make (or produce, in the case of Weitz and his brother, Chris) a movie about the brief Christmas truce that happened between British and German soldiers in 1914 somewhere around Belgium in the early days of World War I.
The new kid on the block is a French-German co-production called Joyeux Noel, directed by Christian Carion and costarring Daniel Bruehl, Benno Fuermann, Diane Krueger and Guillame Canet. It was shot in Roumania last year, with expectations of a theatrical release in December ’05, according to the IMDB.

Perelman’s project, which was officially announced by reporter Dana Harris in Variety a couple of days ago, is called The Truce.
Collateral screenwriter Stuart Beattie wrote the script, casting is now underway, and the studio backing is from Warner Independent.
The Weitz project would be called Silent Night, and is based on a book about the truce that has the same title and was authored by Stanley Weintraub. The book has been adapted into screenplay form by Jon Robin Baitz (People I Know).
According to information provided in mid-December by the Weitz’s partner Andrew Miano, who runs their Depth of Field production company, Miano would produce Silent Night along with Paul and Chris. The funding would come from Universal, and the plan would be to shoot somewhere in Europe, or maybe England.
Miano said in December that he and his partners intended to hire a director for their project right after the holidays. I tried reaching him twice — yesterday and today (1.14) — to see if this was still on, but I never heard back. If I were them I would chuck it. Three movies about the same exact incident…c’mon. Two is too many.

Since I’ve gone on a bit about finding “money” shots (stills, video footage) of the Southeast Asian tsunami, I might as well put a cap on it and share these video clips, which, I imagine, most the hard-core types have already downloaded by now.
These amateur clips don’t exactly show that “wall of water” shot everyone’s been hoping to find, but they provide some riveting images of the tsunami from various angles and locales: Clip #1 , Clip #2 , Clip #3 , Clip #4 , and Clip #5 .

“I thought you might like to know that the BBC News website has a nice article from the producer of Adam Curtis’s The Power of Nightmares that answers the critics of the program, and in doing so summarises the whole thing.
“Since I’m English it was easy to see this really great documentary last October, but I find it shocking that there’s no way this will most likely ever be seen on American television. It’s going to be shown on BBC 2 here again from the 18th to the 20th of this month, if your readers would be interested.” — Laura Aylett.

January 14, 2005by Jeffrey Wells4 Comments
« Previous post
There’s this extremely weird, slightly
Next post »
You can toss out the