The pancreatic cancer that has been weakening poor Steve Jobs is apparently back and aggressive as hell. I’m very sorry. May his remaining days be creative, spiritual and full of love. It does seem weird, however, that so many people are convinced that when Jobs dies, Apple will start to die as well. There are no young bucks out there with the instincts and abilities to keep that company grooving along like it should? C’mon. 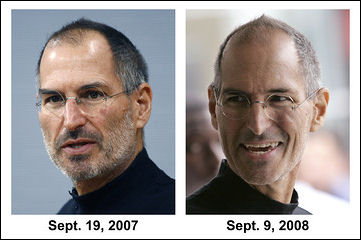 I felt nothing but contempt for the Spanish soldiers in El Cid who cried like children when word got out that the arrow in Charlton Heston‘s chest might be fatal, or at least incapacitating. “We cannot fight the Moors without the Cid! We will not” An army that refuses to re-charge and re-constitute itself when a leader dies is indeed finished. But why would Apple stockholders think and act this way? Cowards. Sheep.