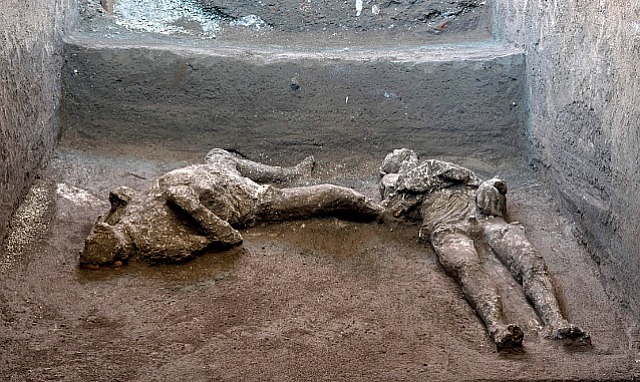 Excerpt from HE’s review of Paul W.S. Anderson’s Pompeii, posted on 2.22.14: “I don’t have to tell you Pompeii is bad. Everybody knows Pompeii is bad. It’s ludicrous, and that’s because mythical popcorn movies have all devolved into the same mindless, effects-driven gruel that even the schlockmeisters of the past (Dino De Laurentiis, Sir Lew Grade, Carlo Ponti) would refuse to touch if they were time-machined forward.

“Epic, escapist, large-scaled cinema has been engulfed and poisoned by the ComicCon virus (video-game and comic-book mythology, physics-defying fantasies), and submentals the world over are submitting to the historical visions of pulp-loving low-lifes like Zack Snyder (whose 300 I hated) and Steven DeKnight (the Spartacus series) and Pompeii‘s Paul W.S. Anderson (the poor man’s Snyder).

“Some of the ‘fans’ (i.e., the ones who watch this crap ironically) obviously know that the video-game vistas and blatantly fake-looking CG compositions are unfit to watch and that the cliched, braindead dialogue is unfit to listen to, and yet everyone is nodding out and munching away in the multiplexes as if that’s the way it’s supposed to be. We all know things are bad — worse than bad. They’re crazy. It’s like everything everywhere is going crazy.”