Bruce McDonald‘s The Tracey Fragments (Thinkfilm, 5.9) is apparently the first feature ever to be composed entirely of “Mondrian-like” split screens. The Canadian-produced film is also propelled, to go by festival reviews, by Ellen Page‘s tour de force performance as 15 year-old Tracey Berkowitz, who recaps her recent history as she “sits on the back of a city bus, naked except for the tattered curtain she’s wrapped in, and looking for her missing brother, whom she fears she has hypnotized into believing he’s a dog.” 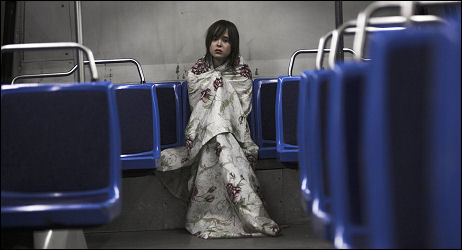 I’ve avoided seeing this film for a long time (it was first screened at the 2007 Cannes market, and then shown at Toronto last September, then at the AFI Festival in November). Now the release date is less than a month off, the side-stepping is over and I’m going to have to face it like a man. I just don’t want to know about a girl whose brother thinks he may be a dog. I’m done with that stuff in my life. I’m not much for nearly naked teenagers in the backs of buses either. I’ve been in some very strange places in my youth and can relate on some level, but even when I was a somewhat reckless and irresponsible kid I didn’t know anyone who was screwed up enough to think they were a dog, and if I did I would have avoided them like the plague.
I love the fact, however, that The Tracey Fragments was filmed in 14 days but took 9 months to edit. I also love the fact that “as part of the promotion for the Canadian release, the distributor released all of the original footage as downloadable torrent files and encouraged people to re-edit the footage into whatever they saw fit…this is believed to be the first theatrically-released film to make its footage available in such a fashion….entries ranged from music videos to a complete re-edit of the film in linear order, without split screens.”