There was a Tribeca Film Festival screening and after-party last night for Barry Ptolemy‘s Transcendent Man, a proflle of futurist and “singularity” proponent Ray Kurzweil. He’s been projecting that singularity — the creation of super-intelligent, long-lived beings via the fusing of humans and computers — will happen within 30 years. Ptolemy profiles Kurzweil as well as followers — including Steve Wonder and William Shatner — of his regimen, which he says will bestow eternal life. 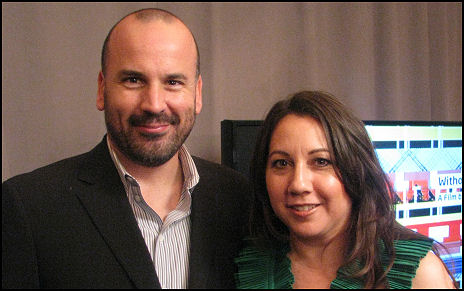 Ptolemy “also interviews evangelists who believe that Kurzweil is challenging God, especially by his ongoing endeavor to bring his father back from the dead,” says a Popular Mechancis summary. “Ultimately, Ptolemy asks if singularity is the theory of a genius or a sci-fi idea taken too seriously.”

I missed last night’s screening due to being at IFC’s Fear Me Not dinner near Rivington and Bowery, but I wanted to very much to meet Transcendant Man composer Phillip Glass, whom I’ve admired for decades. I was told when I got to the party, however, that Glass was unable to attend due to a concert he was performing. This “concert,” I later found out, was a private party that Glass was hosting at his home near the intersection of 2nd Avenue and 3rd Street. He did perform there, I’m told.

“In the year 2050, if Ray Kurzweil is right, nanoscopic robots will be zooming throughout our capillaries, transforming us into nonbiological humans,” an article reads. “We will be able to absorb and retain the entirety of the universe’s knowledge, eat as much as we want without gaining weight, shape-shift into just about any physical form imaginable, live free from disease, and die at the time of our choosing.

“All of this will be thrust on us by something that Kurzweil calls the Singularity, a theorized point in time in the not-so-distant future when machines become vastly superior to humans in every way, aka the emergence of true artificial intelligence. Computers will be able to improve their own source codes and hardware in ways we puny humans could never conceive. This will result in a paradigm shift that sees mankind coalescing with its own creations: man and machine, merging into one.

“These grand-scale premonitions are largely based on Kurzweil’s law of accelerating returns, which states that the development of technology has been increasing exponentially since the beginning of time. That concept isn’t really compelling to anyone but science nerds until you focus on the ‘knee’ of this exponential curve — the point where the perpetual doubling of technological growth skyrockets and negates the linear models of progress that people like economists have relied on for so long.

“Kurzweil says we’re just about to start rounding this bend and that the rate of progress will be so great it will ‘appear to rupture the fabric of human history.’ In other words, we will trump nature and take control of our own evolution.”