A bizarre metamorphosis has settled in with Nic Cage over the last three years. There is less and less about his onscreen manner or behavior which one would call “sane” if one were to encounter it in real life. His rigid, feet-in-cement, lunatic-asylum personality in Knowing confirms this, I’m afraid. Cage’s characters have become so loco-weed that he seems to have crossed into cuckoo-land in his actual life. 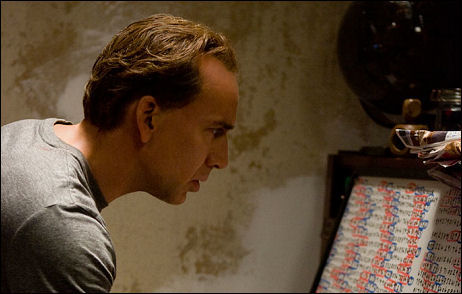 Which makes him seem not quite of this earth. I’m not trying to insult or degrade the guy. I’m saying there’s a beyond-Klaatu qualty to the men Cage has portrayed in The Wicker Man, Ghost Rider, the National Treasure movies, Bangkok Dangerous and Knowing. It’s like some virus has gotten into his system, like a pod was placed next to his bed in ’05 or ’06 and another life form took over.

Cage, of course, has always played guys who were eccentric or vaguely wackazoid in some way. It’s what I’ve always loved about him. Leaving Las Vegas, Matchstick Men, Vampire’s Kiss, Adaptation, Gone in Sixty Seconds, Con Air, Bringing Out The Dead, 8MM, Snake Eyes, Face/Off — these were films in which Cage played curious nutters but conveyed at the same time that he had a passing acquaintance with off-screen sanity, or at least the manner and behavior of a relatively “normal” guy. As committed as Cage has always been to the reality of the character, you believed he was performing a part.

No longer. Now a Nic Cage movie means you’re in for less of what narrative movies tend to do (a mixture of acting, story, pacing and atrmosphere) and more of an alternate-reality trip in the form of a behavioral study of a guy who’s become a kind of stone-faced alien zombie trying to pretend like he’s human and doing a half-decent job of it, but with the zombie part getting more and more determined to run the show. That’s what’s been happening since The Wicker Man. Tell me I’m wrong.