Warner Bros. publicity has given Rolling Stone‘s Peter Travers an early-ish peek at The Dark Knight, and he’s responded in his usual eager-beaver town-crier way, applying lotsa passion and saliva and goo-goo gah-gah. Knight may be a good or even great film, or at least a wild slam-banger, but there’s no trusting Travers. About anything. Especially when he’s the first one out of the gate. 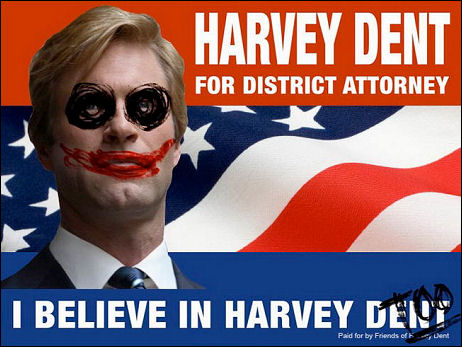 “Heads up — a thunderbolt is about to rip into the blanket of bland we call summer movies,” he begins. “The Dark Knight, director Christopher Nolan‘s absolute stunner of a follow-up to 2005’s Batman Begins, is a potent provocation decked out as a comic-book movie. Feverish action? Check. Dazzling spectacle? Check. Devilish fun? Check. But Nolan is just warming up. There’s something raw and elemental at work in this artfully imagined universe.
“Striking out from his Batman origin story, Nolan cuts through to a deeper dimension. Huh? Whah? How can a conflicted guy in a bat suit and a villain with a cracked, painted-on clown smile speak to the essentials of the human condition? Just hang on for a shock to the system. The Dark Knight creates a place where good and evil — expected to do battle — decide instead to get it on and dance. ‘I don’t want to kill you,’ Heath Ledger‘s psycho Joker tells Christian Bale‘s stalwart Batman. ‘You complete me.’ Don’t buy the tease. He means it.”
Opposites not only attracting but making each other feel whole? Hmmm. I’m not all that sure this is an especially rich observation.