I don’t know much about Terrence Malick‘s The Tree of Life. Okay, I know a couple things. I know that I’ve faintly disliked the title from the get-go because it sounds too pat and cliched. I know the film is coming out in the late fall through Apparition, the new distribution company. And that it’s about an anxious and disturbed middle-aged guy named Jack (Sean Penn) trying to get past a long-simmering resentment of his father (Brad Pitt). And that one way or another Malick’s narrative takes a detour into a dinosaur realm of some kind. 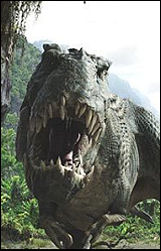 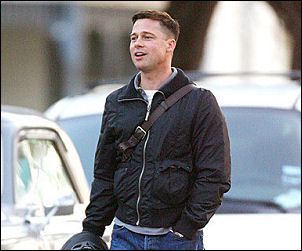 My understanding is that Brad Pitt plays Sean Penn’s dad in Terrence Malick’s Tree of Life.

I was talking about the dino aspect with a journalist friend a couple of weeks ago, and we were both shaking our heads and acknowledging what a bizarre mind-fuck it sounds like. On paper at least. And it’s not like I’m blowing the dino thing out of proportion because there’s some kind of Tree of Life-related IMAX dinosaur movie due in early 2010 that will augment or expand on some theme that’s expressed within the parameters of the Penn-Pitt story. Right? I’m just trying to sound like I have a clue.

All I know is that it’s one hell of a transition to go from a story of angry, frustrated people in the 1950s as well as the present and then to somehow disengage the spacecraft and travel into another realm entirely (like Keir Dullea did in 2001: A Space Odyssey when he soared through Jupiter space), and somehow float into a world that is pre-historical and pre-human, and have this time-trip somehow add to our understanding and feeling for the sad/angry/bitter people in the Pitt-Penn realm.

And I just think it’s time for a little taste. A little marketing hors d’eouvre. Some kind of meet-and-see immersion. You can’t just open a movie like this and go, “Okay, guys…. Penn, Pitt, angst, dinosaurs! Line forms to the right.” You have to set things up and prepare people, get them in the mood, warm up the sauce pan, put out a trailer or a short reel…something.

I mean, if someone like me is scratching his head and going “what the fuck…?” over the unusualness of a ’50s domestic drama mixed with footage of prehistoric beasts, imagine what Joe Popcorn is going to think or say. Don’t even talk about the Eloi. Tree of Life is going to be out in.,..what, three and a half months? Four? Time for a little hubba-hubba.