About a month ago Josiane Balasko‘s Cliente, about a 51 year-old businesswoman (Nathalie Baye) paying for the no-muss, no-fuss sexual services of a younger man, opened in France. This struck me right away as a good idea for an American remake. Especially with a classy, high-pedigree actress of a certain age — Kristin Scott Thomas or Meryl Streep, let’s say — in the lead role. 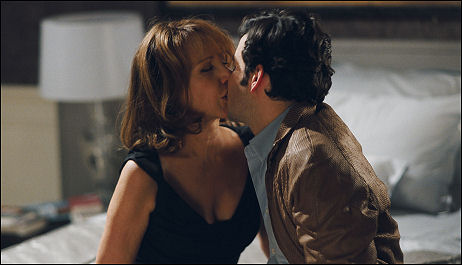 Over and over I’ve walked the aisles of Gelson’s and Ralph’s in the evening and seen women in business suits pushing their carts, alone and guarded and yet, you can tell, quietly hurting for something else besides this. Perhaps resigned to not having a relationship but not willing to turn themselves off to the extent that they have no life except work, sleep, girlfriends, exercise, pets, children and DVDs. If I were a producer I’d be looking into the remake rights as we speak.

Balasko, 58, has told N.Y. Times reporter Elaine Sciolino that her goals in making the film were twofold. One, “to shatter a long-held taboo in France” and two, “to send a positive message to middle-aged women who find themselves alone and wanting sexual fulfillment.”

Balasko says that “a lot of my friends are alone, lonely, divorced, and they can’t always reinvent themselves with another man and a new family So I decided to show a female client of a male escort. She’s not a victim but a woman who is in control of her life, her feelings, her sexual pleasure.”

Is someone going to tell me things are different for older single American women? That they don’t share the same situation, and don’t feel and want the same things? As long as they believe that satisfaction can be had with the proper safeguards and allowances for modesty?

Prostitution, says Balasko, “is the last sexual territory owned by men. [They] are in control of pleasure and have the right to buy it. Women do not.”