Turn Me On, Dead Man

Will Ferrell‘s track record over the last five years (and particularly the titanic failure of Land of the Lost) has earned him the title of Hollywood’s most overpaid actor, according to an intensive survey announced a day or two ago by Forbes.com. 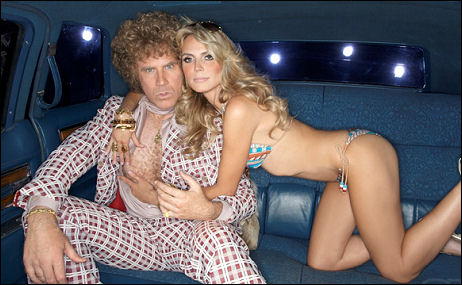 The survey is not, in other words, a portrait of who’s hot and who’s not right now, but a specially focused statistical assessment of the last five years. So Ferrell doesn’t have to put on shades and a fishing hat and drive out to Indio and rent an apartment there under an assumed name. He’s damaged, yes, but tomorrow is another day.

Never look back. Always look forward. Statistics always lie. Those who stand on train-station platforms and take notes about the size and speed of the trains pulling into the station and/or whizzing by at bullet speeds aren’t on them, and therefore they don’t really get it.

Ewan MacGregor was named the second most overpaid actor, Billy Bob Thornton came in third, Eddie Murphy (taken down by the bombing of Meet Dave and Imagine That) ranked fourth, and Tom Cruise (decimated by Lions for Lambs and to a lesser extent by Valkyrie) came in sixth. Oher top-tenners include Leonardo DiCaprio, Drew Barrymore and Jim Carrey.

Forbes began with a list of the 100 biggest stars in Hollywood who had starred over the last five years in at least three movies that opened in more than 500 theaters. The team then calculated a return-on-investment number for each star by dividing total operating income on the three films by the star’s total compensation, including up-front salaries and earnings from DVD and TV sales.

Forbes.com claims to offer a review of the full list but in fact refuses to do so. Go to the page and there’s no click-through option to the list — only one that takes you back to the main story

Ferrell’s films earned $3.29 for every dollar he was paid. A Hollywood Reporter story noted a contrast to the $160 that Shia LaBeouf‘s movies returned to the studios for every buck he earned. “No, no, no” LaBeouf — who starred in Transformers in 2007 and Indiana Jones and the Kingdom of the Crystal Skull in 2008 — sits at the top of Forbes list of Best Actors for the Buck (which you also can’t click on).