As I began to say last Thursday, Greg Mottola‘s Adventureland (Miramax, 4.3) is modestly pleasing — a period relationship drama with comedic spritzing that’s unforced, settled down, not bawdy or coarse, and proportionately buyable. That’s another way of saying it’s a piece of recognizable realism with two solid, nicely unpretentious performances from Jesse Eisenberg and the always sublime, rock-sexy Kristen Stewart. 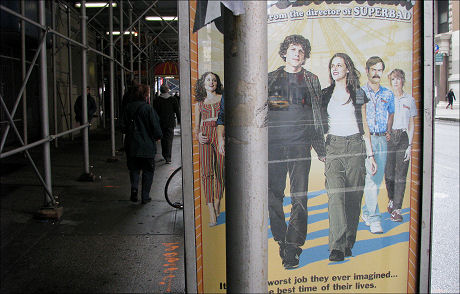 When I begin to watch a film about kids in their early 20s doing whatever, I silently pray to myself, “Please don’t let it be stupid.” Or “please let the characters not be gullible or at least have a shred or two of common sense, or at least a capability for intelligent dialogue….please.” Most of the time films of this sort fart in my face, but not this sucker. Adventureland is bright and honest and restrained in a likable, low-key way.

I didn’t like some aspects. I could have done without the stabs at humor. (They feel off-point.) The parents of Eisenberg’s character — Jack Gilpin, Wendie Malick — felt overly curt and charicatured. But I was generally pleased. Not to the point of doing cartwheels in the Brill building lobby, but a film can put you in a pretty agreeable place without making you get all gymnastic.

The irony is that this intelligent, mild-mannered quality may turn out to be a commercial problem. There’s almost nothing in it for the apes who love the downmarket obviousness of the cruder Judd Apatow comedies (I Love You, Man, Forgetting Sarah Marshall, The Year One).

I can just hear the word-of-mouth outside the plexes next weekend. Viewer #1: “So is it funny? Is it foul? Do girls get naked in it? Does anyone lean out of a moving car and throw up?” Viewer #2: Uh, well…no. It’s not really a comedy-comedy. In fact, it’s not even a dramedy. Nobody gets pissed on or thrown up on. Nobody gets naked. It’s more of a nice little realistic love story between two fairly aware people. No tricks or gross-outs.” Viewer #1: “Fuck that!” 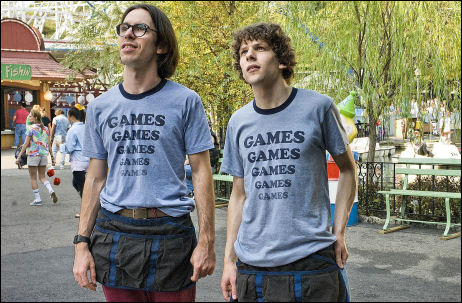 Set in the early ’80s Pennsyvania, it’s about a virginal college grad (Eisenberg) who takes a nothing summer job in a local amusement park after being told by his parents that they can’t afford to pay for his grad-school tuition, much less a trip to Europe. He gradually falls in love with coworker Em (Stewart), who slowly begins to reciprocate despite a side affair she’s having with Connell (Ryan Reynolds), an older married guy who works as the park’s mechanic.

Secondary loser-type characters float in and out — the park owner (Bill Hader ) and his wife (Kirsten Wiig), a brainy Jewish nerd type (Martin Starr), a straight-laced hottie (Margarita Levieva ). Various obstacles, complications, and distractions manifest. But the Eisenberg-Stewart thing — will they? can she? should he? — is the main order of business.

And it all cruises along within an ’80s period vibe. Like a cousin of All The Right Moves. Everything looks and feels a bit grubby and low-thread. Terry Stacey‘s cinematography has a slightly downgraded feeling to it, like a none-too-slick New Line film of the era.

Mottola, the director-writer, uses Lou Reed‘s “Satellite of Love” on the soundtrack (and even throws in a discussion about the lyrics at one point), but the song that seems to sum up Adventureland, for me, is “It’s A Turn Down Day” by The Cyrkle. Generationally wrong, of course, but tonally or attitudinally it’s somehow right in line. I can’t explain it any more fully than this.