Talk about two more cool Sundance ’08 movies, passed along last night. One is Alex Rivera‘s Sleep Dealer (Dramatic Competition), which has been described as a futuristic Mexican sci-fi drama by way of William S. Burroughs. “Gorgeous, intelligent, and intensely imaginative…churning with visual energy and originality…a fascinating and prescient work of science fiction that is as politically engaged as enjoyable to watch,” say the SFF program notes. Except you can’t trust these, of course, so you have to lean on party chatter. 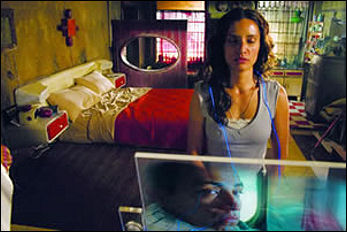 The other is Andy Fleming‘s Hamlet 2 (Premiere), about an oddball high school teacher (Steve Coogan) threatened with job loss who desperately stages an original production of a sequel to Shakespeare’s classic. Catherine Keener costars. Written by Fleming and Pam Brady; executive produced by Albert Berger, Ron Yerxa and Michael Flynn.