EW‘s Mark Harris has posted two dead-on reasons why people should see Charles Ferguson‘s No End In Sight, that infuriating doc (in a good way) that I’ve written about two or three times about how U.S. officials totally cocked up the Iraqi occupation and all but incited the insurgency with their outrageous bungling. 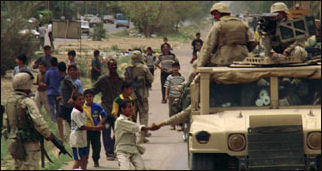 One is that “it’s made by someone who knows more than you do,” Harris writes, “so you’re guaranteed to come away from it smarter…[plus] the precision with which Ferguson lays out [the mistakes] is riveting.” And two, “the movie doesn’t fetishize outrage. It seems to have been made with the kind of calm focus that is bred by deep anger, but it always stays on mission. In an era of shout-first-ask-questions-later filmmaking, Ferguson’s frosty intensity is exciting.”