Yesterday afternoon I announced Hollywood Elsewhere’s Tyrannosaur fundraising campaign with the idea of raising $2000 to cover the rental of a screening room that Strand Releasing doesn’t want to pay for. I’m happy to announce that just shy of $700 — more than a third of the amount required! — is now in the safe. So I’m asking again for all believers to step up and throw in $20 or so to help pay for this. Tyrannosaur power! 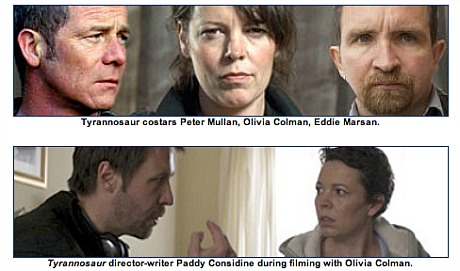 The backstory behind this bizarre but encouraging turn of events is right here.

Strand has told me that BAFTA will probably offer their facilities for a screening under their auspices, but that they also appreciate HE’s efforts and will work with me to set up this tastemaker screening, which will presumably happen next week or the week after.

“The most original adult love story I’ve seen in ages,” I wrote during Sundance 2011. “Easily the biggest shock of the Sundance Film Festival so far. I didn’t see this one coming — it’s a much stronger and more focused film than I expected from a smallish British drama about an older working-class guy with a temper problem. It curiously touches.

“Tyrannosaur is a drama that deals almost nothing but surprise cards — a tough story of discipline, redemption and wounded love. Cheers to director-writer Considine for making something genuine and extra-unique. He’s not just an actor who’s branched into directing with a special facility for coaxing good performances — he’s a world-class director who knows from shaping, cutting, timing, holding back and making it all come together.”

“I didn’t mention the actors — Peter Mullan, Olivia Colman, Eddie Marsan — but their performances simultaneously stand alone and reach in and grab hold. In fact each and every performance (and I mean right down to the dogs) is aces.

“The beast of the title is Joseph (Mullan), an alcoholic, widowed, violence-prone rage monster who lives alone in Leeds. He all but melts when he encounters Hannah (Colman), a kind and trusting shop merchant who shows Joseph a little tenderness. Hannah talks the Christian talk but is just as close to alcohol, which she’s turned to as a sanctuary from her ghastly marriage to a homely, ultra-possessive monster of another sort (Marsan) who brings violence and subjugation to Hannah on a constant basis.

“Once Mullan and Colman have formed a kind of friendship, the inevitable final conflict with Marsan awaits. One naturally expects (and in facts savors, truth be told) some sort of howling, knock-down, face-gashing fight between Mullan and Marsan, but…well, I’ll leave it there but it’s more than a bit of a surprise what happens.

“I was so taken with Tyrannosaur in the screening’s immediate wake that I shared my reactions with a young freelancer I’d spoken with in the cattle tent. He’d just seen it as well, and basically went ‘meh.’ My mouth almost fell open. ‘You think what we just saw is just okay?,’ I thought but didn’t say. Jeezus Christ. It takes all sorts and sensibilities to make a world.”