I can’t decide which adjectives or catch phrases to use in this review of Paul Greengrass ‘s The Bourne Ultimatum (Universal, 8.3). I’m really kinda stuck. Pulse-pounding, edge-of-your-seat, bobsled, warp-speed, heart-in-your-throat…how many hundreds of times have I read those terms? It’s gotten so they don’t mean very much. But this final Bourne flick does, I feel, “mean” something. That is, apart from the fact that all I could say for the first five or ten minutes after coming out of last night’s screening was “whoa” and “wow.” 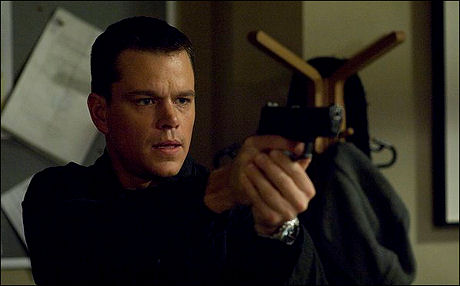 The Bourne Ultimatum is, naturally, one steriod orgasm action blast after another, but that’s expected. What else could it be with those two super-Bourne‘s before it? So let’s try and quantify. I think it’s an action movie milestone in two ways. One, by pushing the velocity-junkie aesthetic to new super-pleasurable extremes. And two, by being so good at this go-fast game that you don’t care that those hallowed dramatic substances — character brushstrokes, echoes, deep-down emotion, dialogue that addresses something besides story points. — are all but absent. You just don’t care. You’re in adrenaline heaven.
The best analogy I can think of is William Friedkin‘s subway-chase sequence in The French Connection, which lasted…what?…12 or 13 minutes? The Bourne Ultimatum runs 111 minutes and it has, at the most, 12 or 13 minutes of down time. The basic action-movie manual says you’re supposed to let the audience catch a breath between “musical numbers.” Ultimatum has a few of these, short ones, but they’re all assessment scenes about what just happened or what may be coming ’round the bend. You never feel as if Greengrass is downshifting to any serious degree (i.e., no sensitive love scenes, no “I’m tired and I need to sleep,” no talking softly while cooking in the kitchen).
Think of the three Bourne movies as high performance engines. Doug Liman‘s The Bourne Indentity (’02) had a few moments that took place in first and second gear, and one or two (the love scenes between Matt Damon and Franka Potente) in neutral. Greengrass’s The Bourne Supremacy (’04) was a serious increase experiment — a major pedal-tromp, cut-faster, crazy-legs thing — but even that film had moments of relative calm when emotion was given a little room to spread out (i.e., the death of Potente, the remorse scene in Moscow at the end). But Ultima- tum is even more high-octane than this. Everything, it seems, is flying in third, fourth and fifth gear. Not a single neutral moment…not one. 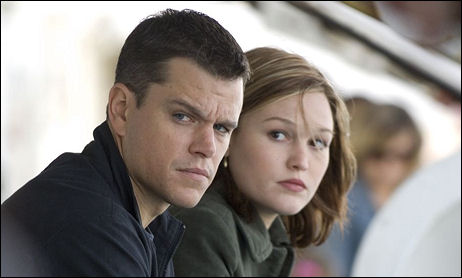 When I lean forward in my seat during a film it usually means I’m in pain. At last night’s screening I was leaning forward but without my hand covering the lower half of my face — a significant thing. I was in one of those “holy shit, am I going to be able to keep up with this?” modes. It was like driving at high speed and being afraid to take your eyes off the road. A friend tapped me on the shoulder during the third act (i.e., the New York portion) to share a quick observation, but I reflexively flinched and indicated with my hands that I couldn’t talk, not then, not even for five seconds…good God.
I was bitching after the second Bourne about Greengrass’s overly-fast editing during three or four action scenes. There’s a point at which hyper-cutting can be too much, but for whatever reason I was cool with it this time. Was there a different aesthetic this time? Was there an editing-room motto that said “no cuts longer than two seconds” on Supremacy and one that said “no cuts longer than three seconds” on this new one? I don’t know. I wasn’t carrying a stop-watch.
There was one moment when I realized Damon was no longer in London, but in Madrid. There had been nothing that said “travel” or “cultural transition”…he was just suddenly there. Nor is there any footage given to his flight from Europe to New York City. No getting to or coming back from airports, no taxis, no jet lag…none of that. It’s all hammer-hammer-hammer. 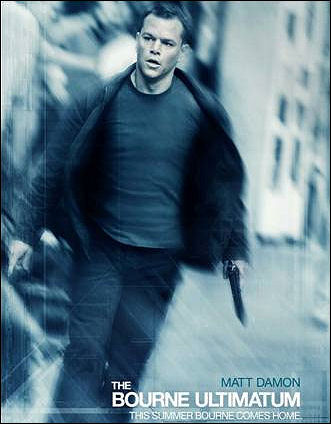 I’ve written dozens of times about hating action movies in which the hero is unstoppable, unwoundable, unkillable. Damon’s Jason Bourne is all these things and more. He’s a damn cyborg — no eating, no sleeping, no stopping for anything — and I loved it. And yet if I see some lower-level action star do the same thing in some run-of-the-mill B movie two weeks from now, I’m probably going to hate it. Why? The Bourne Ultimatum is coming from a high-thread-count, ahead-of- the-curve place that I hadn’t quite tasted or imagined before last night. It’s an action movie for people who think they’re too sophisticated to enjoy them.
When Damon took out three guys in a first-act scene set in London’s Waterloo station, I didn’t cringe for a second at the improbability of such a move. I loved it, the audience loved it and we all clapped. I imagined the bad guys (i.e., young grunt-level assassins) as being in the employ of Dick Cheney and all the other black-heart D.C. hardballers, and seeing them get beaten and out-maneuvered time and again is a joyous thing.
The triumph of Jason Bourne in this film is, no lie, a triumph of humanism. Bourne is not a sadist or even a killer as much as a survivor. The movie is not about killing villains as much as shaming them — making them fail so badly and so repeatedly that they have no choice at the end but to go to jail, give up or re-think their game.
There’s a hand-to-hand combat scene in Tangier between Damon and a contract assassin named “Desh” (Joey Ansah) that’s an instant classic. It’s right up there with Sean Connery‘s fight to the death with Robert Shaw in the train compart- ment in From Russia With Love. Above and beyond it, I’d say. I’m trying to think of others in this class. 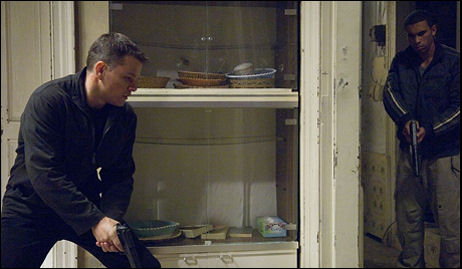 Each and every computer works perfectly in this film, and everyone has light-speed broadband. Each and every cell-phone video transmission and upload works every time. Technology is perfect, dazzling and awesome at every step. The Bourne Ultimatum is a fantasy film.
There are lines every now and then that sound a little flat, a little pulpy…but I wouldn’t call them speed bumps. The only thing I really didn’t care for is a bit in which (I need to be careful here, can’t say when it happens) a simulation of a certain state of being is offered for several seconds, and is then reneged upon just so Greengrass can go “fake out!” It’s a cheat, a schmuck move.
I could do the whole plot recitation thing and congratulate all the actors for being note-perfect…okay, I’ll do that. Damon is The Man, and I’m really, really sorry that he’s declared that this is the final Bourne. He is so much more “the guy” than Daniel Craig, and I’m fine with Craig. Cheers to Joan Allen, Julia Stiles (especially good in her one-on-one scenes with Damon), David Strathairn, Scott Glenn, Paddy Considine, Edgar Ramirez and the dozens of other actors who make it all seem sharp and true.
A crisp salute to screenwriters Tony Gilroy, Scott Burns and George Nolfi, and a deep bow of respect to cinematographer Oliver Wood, editor Christopher Rouse, composer John Powell, production designer Peter Wenham. The biggest tip of the hat goes to Greengrass, of course — he is truly the top dog in the high I.Q. action realm. I love Bloody Sunday, United 93, The Bourne Supremacy …the guy hasn’t slipped up once. It’s good to have him around. Someone this good, I mean.