I ran a rave review of Lucy Mulloy‘s Una Noche 16 months ago, after catching it at the 2012 Tribeca Film Festival. It’s opening in New York on 8.23 and on iTunes on 8.26. Una Noche “is a little raggedy at times, but always straight, fast, urgent and honed down,” I wrote. “It’s not quite on the level of Fernando Meirelles‘ brilliant City of God but is a contender in that urban realm, for sure. It’s a fine first film, and Mulloy is definitely a director with passion, intelligence and promise.

“Una Noche gets right down to it and doesn’t crap around. There’s a restless urgency and exuberance in its depiction of hand-to-mouth Havana lifestyles, and a certain sexual current is always weaving in and out.

“Lila (Torre) and Elio (Florian) are twins, although not exactly mirror images of each other. Elio has the repressed hots for the good-looking Raul (Arrechaga), who’s determined to leave Havana. Elio wants to join Raul in the perilous 90-mile journey but is ambivalent about leaving his family and especially his sister.

“Una Noche‘s first two thirds define the chaotic lives of these three. If it’s not one thing it’s another. Raul gets into trouble with the law after injuring a Western tourist who’s had an altercation with his prostitute mom. Elio recklessly steals goods from the kitchen where he works to help Raul. It’s all about dodging the cops as Raul prepares a rubber-tire raft while wrestling with despair, and with Elio not quite able to make his feelings for Raul known. 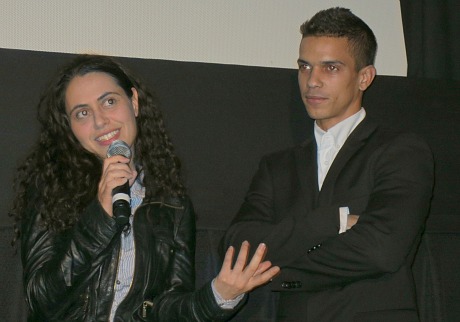 “The hustle-bustle of Havana life isn’t just ‘colorful’ but cruel and scrappy and desperately hand-to-mouth. Everybody has big worries and is living on the knife’s edge. No one’s at peace.

“And then the journey finally begins with Lila deciding to join her brother and Raul at the last minute. She and Raul are attracted to each other right away, and the usual sexual-tension fighting results. The irony is that Lila’s presence (or more particularly her body) creates a threat and then a tragedy at sea. I won’t get any more specific than that. Mulloy said during the q & a that she based her script on true story that had a much darker ending than her own.

“The economy of Una Noche is born out by its running time — a mere 89 minutes. Everybody looks good at the end of it. This is one of those little films that came together just right. Not perfectly or exquisitely but memorably, and that’s what counts.”

“Just before the festival began life echoed art when Nunez and Florian ‘disappeared’ — i.e., apparently defected — in Miami on their way to New York from Havana. 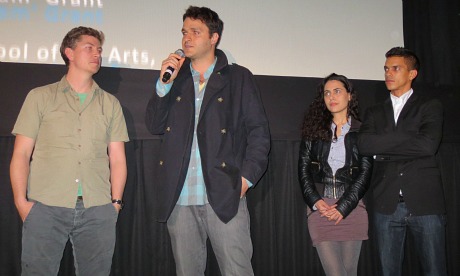 Publicist-furnished Lucy Mulloy bio: A Student Academy Award-nominated writer/director, Mulloy graduated from Oxford in Politics, Philosophy, and Economics and from NYU’s Graduate Film Division. Mulloy was included in IndieWIRE’s On the Rise: 10 Directors of the Future and was on the Berlinale 2013 Generation Jury. Una Noche, her first feature, premiered in Berlin to critical acclaim, nominated for the Crystal Bear. Una Noche will be released in the US by IFC in 2013 and has swept the international festival circuit winning awards including Best New Narrative Director, Best Actor, and Best Cinematography at the Tribeca Film Festival 2012, Best Script at the Brasilia and at the Athens International Film Festivals, and the Grand Jury Prize at Deauville American Film Festival and The International Film Festival of India amongst numerous other international festival awards.

August 12, 2013by Jeffrey WellsNo Comments
« Previous post
Confirmed — No Lost, Davis or Nebraska at Toronto
Next post »
No Fandom For Me