I’m just wondering if all those brave adults who refused to see United 93 when it opened last April — the “too soon!” crowd — might be inclined to give it a whirl on DVD now that it’s won the Best Picture prize from the New York Film Critics Circle. You know what? Naaaah. 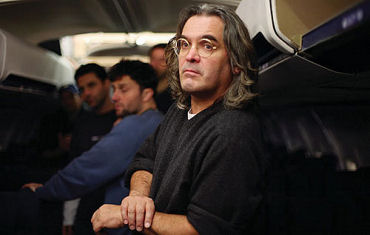 Director Paul Greengrass during the shooting of United 93

Does this award put United 93 into the running for one of the five slots in the Best Picture Oscar noms? As much as I’d like to see this happen, my sense is that it probably won’t. Those Academy members who were too squeamish about seeing United 93 last April are probably in the same place now no matter how well it does with the critics groups. Universal’s Oscar strategist Tony Angelotti has his work cut out for him, but if anyone can do it…
Rest assured, there is at least some confusion and probably very little joy in Mudville (i.e., Movie City News) over this decision. David Poland pretty much dismissed this film right out of the gate.
I was delighted when I heard the news early this afternoon. I’d just finished a round-table chat with Letters From Iwo Jima star Ken Watanabe and was standing in the banquet room loading up on baked salmon with all the other junket freeloaders when I heard the news from publicist Jeff Hill. I’d pretty much given up any hope for distinguished black sheep of a movie and then…kapow!
Six months ago I wrote that “my choice for the best film of the year so far, no question, is Paul Greengrass‘s United 93 — a film that many, many people still don’t want to see, but is truly a pulse-pounder for the ages, in part because it’s so stunningly well-made, but mainly because the extraordinary craft manifests in all kinds of haunting ways.
“Composed of a thousand details and a thousand echoes, United 93 is a film about revisiting, recapturing, reanimating…about death, loss and a portrait of heroism that, for me, was too much to absorb in a single viewing. I’ve seen it five times, and I can’t wait to watch and re-watch the DVD.:
For the record, the top New York Film Critics Circle winners are United 93 for Best Film, The Departed‘s Martin Scorsese for Best Director, the Best Actress award to The Queen‘s Helen Mirren and the Best Actor prize to Forest Whitaker for The Last King of Scotland. Have there ever been a Best Actress and Best Actor pair that have won as many critics awards in tandem as Mirren and Whiaker have?
The awards presentation will take place on Sunday, 1.7.07 at the Supper Club, “a new venue for the organization this year.”