In the ambitious but mediocre Blindspotting (Lionsgate, now playing), the sympathetic, Oakland-residing Colin (Daveed Diggs) is trying to stay out of trouble over the final three days of his parole status. Early on he’s sitting in a parked truck as he witnesses a beat cop (Officer Molina, played by Ethan Embry) shoot a fleeing dude in the back, apparently killing him. Colin is shocked, naturally, but his failure to mask his feelings told me that Blindspotting would be a second-tier film.

I stayed to the end and I was right — Blindspotting isn’t good enough.

Colin is only a few feet away from Officer Molina and slightly above. If you’ve ever witnessed a violent altercation the first thing you want to do is not throw any kind of shade or judgment upon the aggressor. Don’t look at the cop or, better yet, duck out of sight. What does Colin do? He eyeballs the cop with a look of complete terror. His wide-eyed expression says “my God, you just shot an innocent dude in the back! Soon as I’m outta here I’m gonna report your ass, physical description and all.” Colin is literally staring a hole in the cop’s forehead. Which is the dumbest thing he could possibly do. What if Officer Molina is a hair-trigger type and looking to shoot someone else? 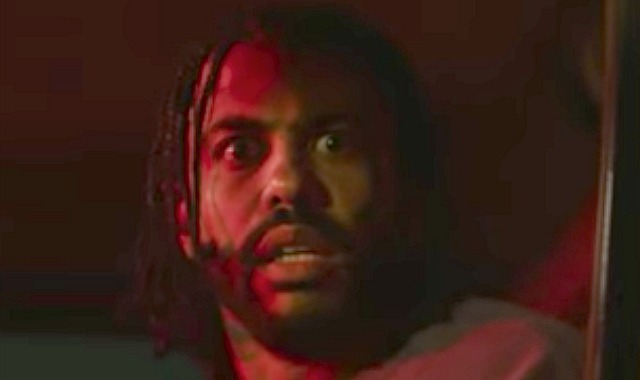 Right then and there I said, “okay, fuck this movie…I can’t abide this level of stupidity.” Diggs (who also produced and cowrote the script) and director Carlos López Estrada decided it was more important to emotionally telegraph how scared and upset Colin is rather than trust the audience to assess the malice on their own. This is what not-good-enough filmmakers and dramatists do — underline, over-explain, assume the audience needs help.

A few minutes later I felt even more turned off by Colin’s longtime best friend Miles (Rafael Casal), a violent, hair-trigger, gun-wielding asshole who’s always threatening to start shit about the slightest personal offense or otherwise do something that might attract the attention of the bulls. Right away you’re wondering “is Colin as stupid as he seems for hanging with this asswipe, or is he just temporarily stupid?”

Casal, a 32 year-old playwright and performance poet, is pretty good at playing an asshole — I’ll give him that. He relies on a broad caricature of Oakland street blackitude — machismo shit talk, constant strut, a mouthful of gold fillings, flashing pistols, drop-of-a-hat hostility, etc.