A more-than-possible Best Picture scenario: Little Miss Sunshine, the little family comedy-drama that could, wins the Oscar. It wins because (a) it’s the only top-five contender without any nagging negatives, and (b) it’s the only top-five contender that’s really and truly about “us” instead of a film about “them” — a simple but primal insight I’ve just lifted from Oscarwatch‘s Sasha Stone. 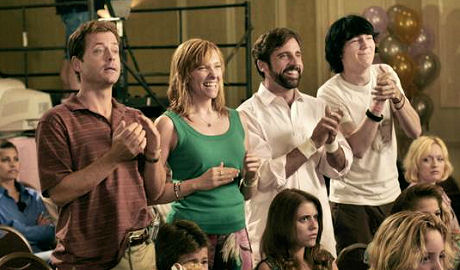 The Queen is primarily a story about “them” (the Royal Family, the elites in the Blair government, the British public). Ditto Letters From Iwo Jima (i.e., the doomed, duty-bound Japanese troops of 60 years ago). And The Departed is too impersonal, in a sense, to be about either “them” or “us” — it’s basically about great Scorsese chops suffused with live-wire writing, acting, editing. (This happens to be a very personal thing with me, but that’s another story.)
Dreamgirls seems very much about “them” — Motown culture of the ’60s, black entertainers from the same period, the gents who wrote, directed and produced the Broadway show along with those who produced and made the film. Is there an “us” element in Dreamgirls? I liked a lot of this film, but nothing from my own life seemed woven into it in any way. Am I missing something?
Babel is absolutely about “us” — it’s about kids and parenting and the random nature of interconnected fate that so affects us en masse — and so is Children of Men (which is all about “our” planet and where we seem to be going), The Lives of Others (in one sense about “them” — urban-artist East Germans during the early ’80s — but also about “our” paranoia plus “our” capacity for compassion and growth) and Volver (one of the all-time great family films, but with an “us” focus because it’s so fully about women).
Perhaps the only other film that is as much about “us” as Little Miss Sunshine is United 93, because it shows who we are and what we’re made of. Don’t tell the Academy ostriches about this — it’ll just make them dig their heads all that deeper into the sand.
And yet these five films are all said to have negatives. Babel, I keep hearing from crabby critics, is too much of a stacked deck. The Lives of Others is seen in some quarters as too specifically German (wrong!) and is, of course, German-made and therefore more of a candidate for Best Foreign-Language Film. Volver is Almodovarian and Spanish and looking at the same deal. And a fair-sized portion of the Academy is apparently (I’m hearing) still refusing to see United 93, despite all the Best Picture awards it’s gotten from critics group.s
The films with the two lowest negative factors are Little Miss Sunshine and The Queen — everyone I know either admires or truly loves these two — but Sunshine will take it in the end because it’s more American and more “real” — more about everyone’s day-to-day lives, choices, failings, uncertainties. The Queen, finally, is about how change sometimes comes along out of nowhere and knocks you over, especially if you’re older. But it is also about an exotic culture that is hardly reflects the deep-down American experience.