When it came to movie stars with testy, pugnacious reputations, Hollywood would cast them in redemption dramas. The guys behind any number of Jimmy Cagney films of the ’30s and’40s pretty much invented this. Put a rogue-ishly likable, anti-social lout into some arduous, do-or-die situation and allow him to redeem himself in the third act. This formula was used in three or four Frank Sinatra films of the ’50s (From Here To Eternity, Young at Heart, The Man With The Golden Arm, The Joker Is Wild, Pal Joey) and finally, for the last time, in The Devil at 4 O’Clock (’61) — Hollywood’s first outdoor ensemble disaster film**. The producers sunk a lot of coin into what were regarded back then as knockout special effects. The best was an exploding volcano — a practical effect that was fortified with heavy fireball explosives and pretty much built from scratch in a farm-country location near Fallbrook, right near Camp Pendleton. Does this character-driven, Mervyn LeRoy-directed adventure cut the mustard by today’s standards? Not from a technical standpoint, no, and a lot of it feels hokey. But from a general quality perspective it’s a lot better than Irwin Allen‘s When Time Ran Out (’80), which used more or less the same story. 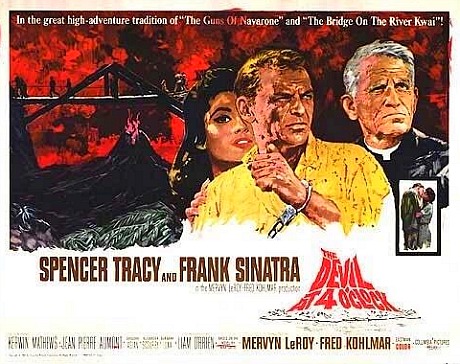