“If you haven’t seen Paul Verhoeven‘s Black Book (Sony Classics, 3.9.07), get your butt into a screening. If you can imagine Verhoeven’s over-the-top style and his obsession with female nudity, blood and other bodily fluids grafted onto a somewhat traditional World War II film about the Dutch underground fighting the Nazis….well, you may not believe what you’re seeing. 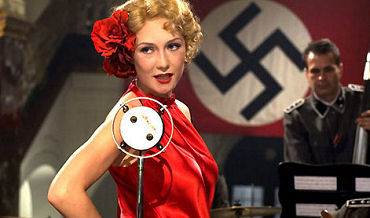 “It is both utterly ridiculous and fabulously entertaining, but at 145 minutes it moves like lightning, It looks in some ways like a 1940s MGM flick (think The Cross of Lorraine) but with a 2006 sensibility. I was chuckling all the way through at how florid it was, but have to admit I thoroughly enjoyed it.” — Manhattan-based hit-shot journalist Lewis Beale in an e-mail sent this morning.
http://www.blackbook-lefilm.com/home.htm