Sitting now at the American Pavillion, which suddenly — graciously! — has installed six plug-ins for those who don’t care to drain their computer batteries. Finding work places with plug-ins is a big problem this year. The Orange wifi cafe inside the Palais has been jammed every day with journos doing their usual-usual and photographers uploading photos, and the balcony area adjacent to the front- of-the-Palais press room doesn’t have seating or plug-ins like it did last year. 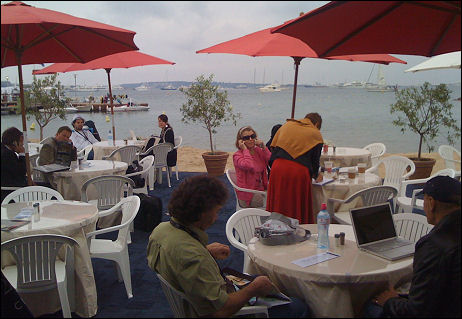 I just counted 27 or 28 yachts out in the bay, including one of those gargantuan, tourist-carrying Love Boat deals. Most of them are destroyer-sized, built for businessmen’s egos. One ship out there looks like something out of a Joseph Conrad novel — oldish and slopey with wood-trimmed portholes, like it was built in the 1920s. Only one looks like a classic sailing vessel with a bowsprit and masts and jibs and all that good stuff. I’ve been dreaming about cruising around the Mediterranean on one of these vessels since I was ten years old.