The Arizona Daily Star‘s Phil Villarreal caught Pirates of the Caribbean: At World’s End the other day and says, “Man, is piracy paranoia ever getting out of control! 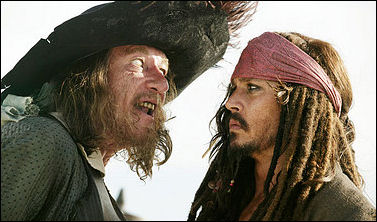 First, he says, “Disney held just one screening in the state of Arizona, meaning I had to drive up to Tempe. Second, they wouldn’t let me bring my DS into the theater, I guess for fear I would somehow record the screening with my innocent little video game machine.
“I absolutely need that sucker as the minutes tick down before the movie starts, to pass the inevitable delays as the p.r. folks try to scramble to get people in seats before they let the projector roll. Back when I had a camera phone I was forced to take it back to the car on many occasions, but never had I been ordered to make the march of shame due to a Game Boy Advance, PSP or DS.)
“Weirdly, they did allow non-camera-equipped cell phones in – which I discovered during my lengthy argument with the security guy – meaning I could have brought my DS if I said it was a cell phone. Unfortunately this didn’t occur to me until I was hunched over my Subaru’s passenger window, waving goodbye to my little patience-maker as I abandoned it to the 300 degree heat of my car interior. (I have no games on my cell phone because I’m a snob who can’t stand dumbed-down mobile games).
“Anyway, once I was finally granted admission to the theater – I couldn’t resist muttering ‘I hope this movie gets pirated’ as I walked in – they shoved this paper in my face that said…
“Dear Friends/Colleagues –
“You are among the first audiences to see ‘Pirates of the Caribbean: At World’s End’ prior to its worldwide release on May 25. We respectfully ask the following:
“Please do not reveal the many plot resolutions that occur throughout the film, completing the characters’ story lines from the previous two movies in the series. We would appreciate it if you would not reveal these details in your articles, on your program, online, on your blogs or in any other format.
“We hope you appreciate there are many Pirates fans who will enjoy their moviegoing experience so much more not knowing in advance the outcome of the many plot twists. Thank you for your consideration.’
“All of what the letter asks are basically understood tenets of film criticism, but the urgency of the writing made me think we’d be in for some unbelievable, Keyser Soze-like twists. The funny thing is, nothing at all surprising happens in the movie.
“They also handed me another form telling me I’d get thrown out if I tried to videotape the movie, and a third form asking me, among other things, to name my favorite scene. That was easy to do: The end credits.”