With Viola Davis’s Retreat to Supporting, Best Actress Race Is All But Over

With today’s announcement that Fences costar Viola Davis will compete for a Best Supporting Actress Oscar instead of a Best Actress trophy (which would have made sense given that she won a Best Actress Tony for playing the same character, Rose Maxson, in a 2010 Broadway production), the Best Actress race is, I believe, all but settled. 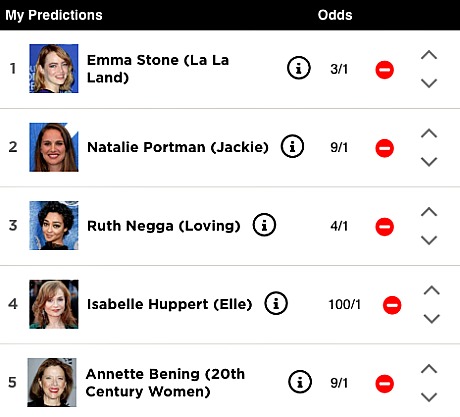 The falling-down reactions to Emma Stone‘s La La land performance at Telluride seven weeks ago made it clear to almost everyone that the Best Actress race would be between Stone and Davis, based on her earlier triumph and the storied reputation of August Wilson’s 1987 play. Then Natalie Portman‘s Jackie scored in Toronto and she became another peak contender. But now with Davis out it seems pretty obvious that Stone all but has it in the bag.

Why? Portman hits a ground-rule double or, at most, a triple. Stone hits a grand slam. It’s that simple.

It’s not just the skillfulness of her La La Land performance but the depth and exuberance and intensity of it. Portman’s Jacqueline Kennedy turn, which will almost certainly be nominated, is more poised and precise — the role as written doesn’t coax or require her to dig down and release an emotional gusher, not the way Stone does in La La Land.

The other likely Best Actress contenders — Ruth Negga in Loving, Isabelle Huppert in Elle, Amy Adams in Arrival, Annette Bening in 20th Century Women — give award-worthy performances, but none can stand up and look Stone’s in the eye. By all means let the process play itself out and let all five nominees in this category celebrate their time in the sun, but I’m not blowing smoke here.