I’d read several reviews and some excerpts from Keith Richards and James Fox‘s “Life,” but I didn’t settle into the book until two days ago. I don’t trust book reviewers — I think they tend to gush, like movie critics, over anything that’s half-decent. So I was genuinely surprised and relieved when it turned out that “Life” actually is an exceptionally honest and well-written showbiz tale, and a bit more. 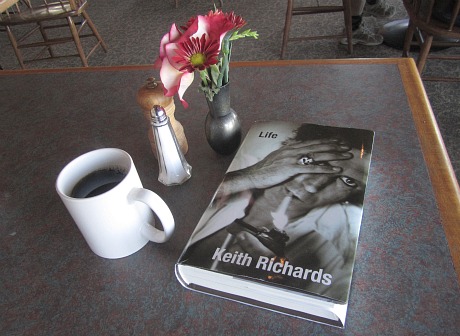 Rock musicians aren’t supposed to be this lean, well-phrased and generally articulate. My suspicion is that Richards didn’t “write” a fucking word of this thing (he probably talked into a digicorder and let Fox do the rest), but it’s still my idea of a stand-out in this realm. Martin Scorsese or someone close to his level needs to make a No Direction Home-like documentary of Richards’ life, using this as a template.

All my life I’ve thought of Richards as a great rock ‘n’ roll musician but an even greater druggie degenerate. A guy who can play like Chuck Berry-plus but who slurs his words and has forgotten half the stuff he’s experienced since the early ’60s. A miracle enough that he’s not dead, I thought when I first heard of this. It would be a bit much, I thought, to expect that he might write (or co-write) a decent book. Keith is 66 and past his prime, and is probably so groggy and stumbling around that he can barely sip tea at tea time…right?

No, dead wrong, re-think it, shut up.

“It’s an eye-opening all-nighter in the studio with a master craftsman disclosing the alchemical secrets of his art,” wrote N.Y. Times reviewer Michiko Kakutani. “And it’s the intimate and moving story of one man’s long strange trip over the decades, told in dead-on, visceral prose without any of the pretense, caution or self-consciousness that usually attend great artists sitting for their self-portraits…Mr. Richards has found a way to channel his own avidity, his own deep soul hunger for music and to make us feel the connections that bind one generation of musicians to another.”

Sample passage (from page 251): “Levitation is is probably the closest analogy to what I feel — whether it’s ‘Jumpin’ Jack Flash’ or ‘Satisfaction’ or ‘All Down The Line’ — when I realize I’ve hit the right tempo and the band’s behind me. It’s like taking off in a Learjet. I have no sense that my feet are touching the ground. I’m elevated to this other place. People say, ‘Why don’t you give it up?’ I can’t retire until I croak. I don’t think they quite understand what I get out of this. I’m not doing it just for the money or for you. I’m doing it for me.”