Wait…It DID Start in a Wuhan Lab?

For roughly a year we’ve all accepted (or at least have not strenuously argued with) the Wuhan wet market explanation of the origins of the coronavirus pandemic — that it came from contact with dead bats and spread from there. This scenario was fortified, in my mind at least, by the worldwide pandemic in Steven Soderbergh‘s Contagion (2011) also originating with bats.

But last night that presumption shattered into pieces, in my head at least. And it really hurts to give serious weight to this hypothesis because it was initially spread by Orange Plague and Mike Pompeo…Jesus.

On Real Time with Bill Maher, biologist and evolutionary theorist Bret Weinstein, whom I respect for standing up to the Evergreen State College wokesters in 2017, and his wife and colleague Heather Heying, co-authors of “A Hunter-Gatherer’s Guide to the 21st Century”, said that the odds that it did come from a Wuhan lab (specifically the Wuhan Institute of Virology) are roughly 90% — not proven and warranting further study, but very likely.

As I understand it, the theory is that Covid-19 accidentally escaped. Potentially from the Wuhan Institute of Virology but possibly from the Wuhan Center for Disease Control and Prevention — which is located 300 yards south of the Wuhan wet market where the virus allegedly started.

Maher to Weinstein and Heying: “We’ve heard a lot recently about the possibility that the coronavirus did start in a lab. Let’s talk about that. The fact that there is this lab…I think it’s the only one in the world quite like it, [and located] in Wuhan, where the whole thing started. It would almost be a conspiracy theory to think it didn’t start in a lab.

“And that theory was demonized at first — ‘Oh, come on, that’s conspiracy thinking, that it started in the lab.’ But it’s certainly a 50-50…would you say that?”

Weinstein: “Oh, it’s far more likely than that. I think I said last June that the chances it came from a lab were about 90%. This was never a conspiracy theory. In fact that term was used to simply make it go away. It’s an obvious hypothesis that is in need of testing, and we are only now, a year [into the pandemic], getting to the point where we can discuss it out loud without being stigmatized.”

Heying: “Part of the problem is that we are so polarized and partisan in this country, that if the wrong guy” — Trump — “proposed this to begin with, and for half the country it was the wrong way, then [everyone] says ‘no way, no how, we’re gonna call this a conspiracy theory’ and we’re never gonna revisit it.” 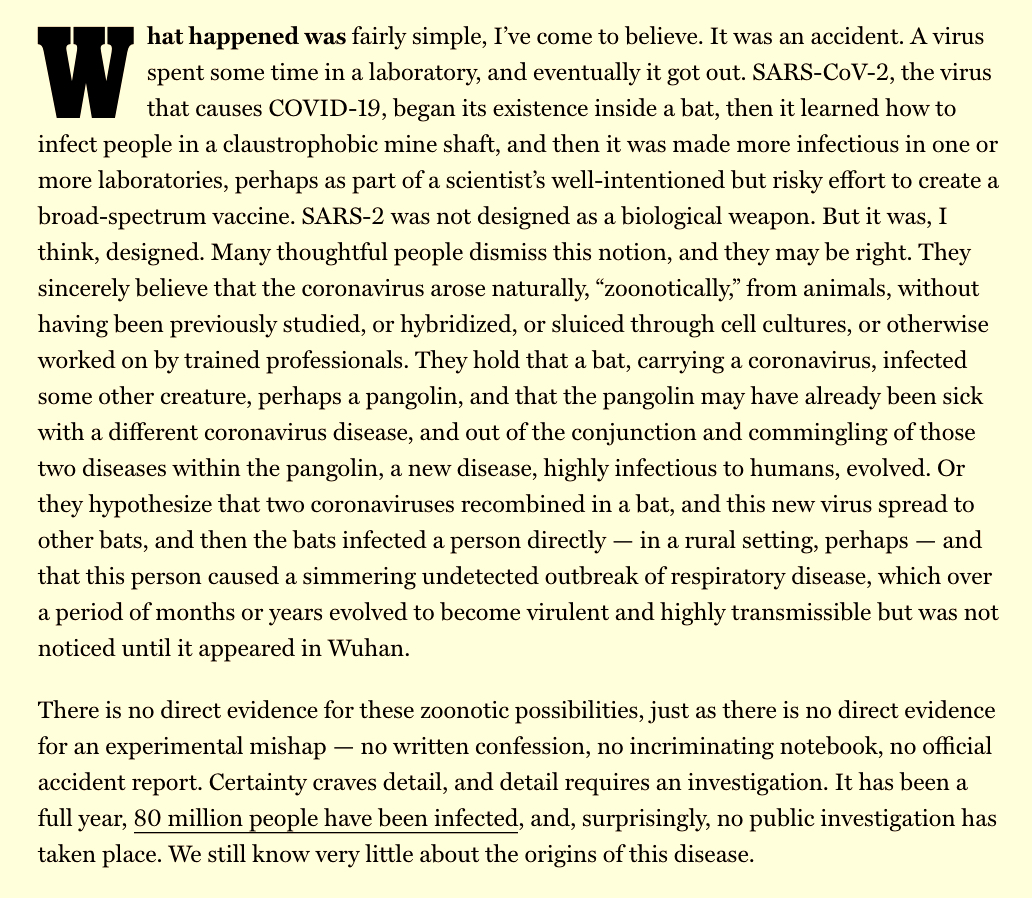